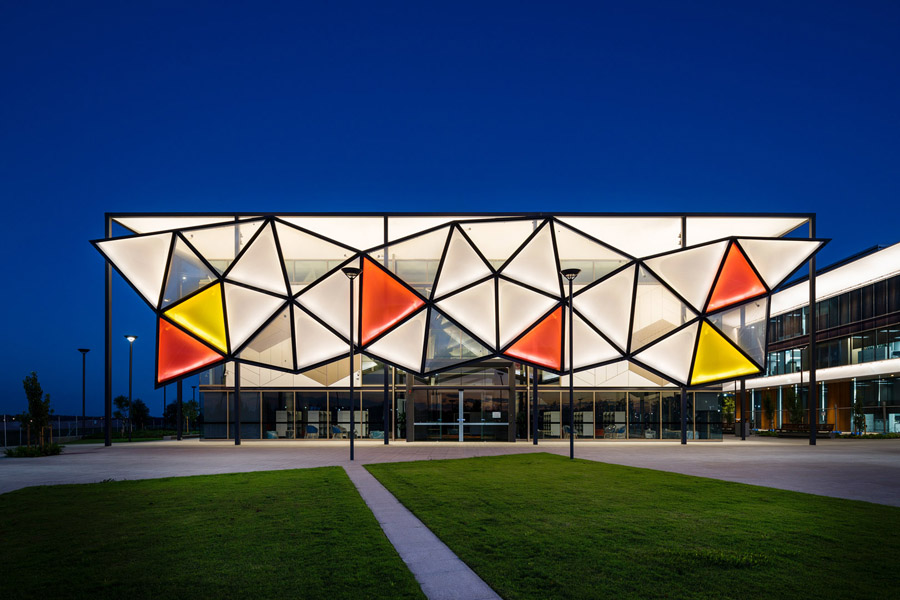 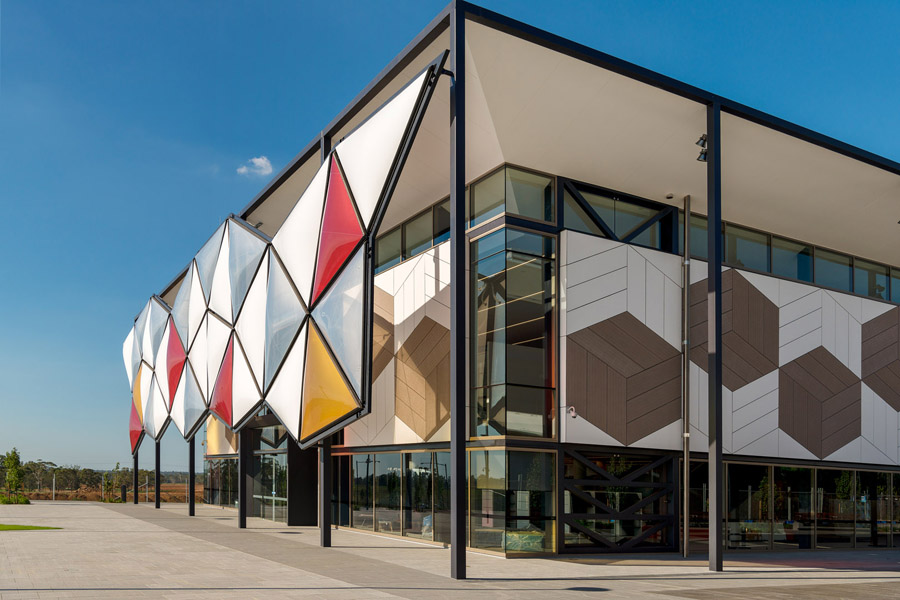 The structure incorporates 2-layer ETFE cushions in a tessellating triangular pattern in red, yellow, white & translucent foils, complete with backlighting which makes the structure come alive at night. It was installed 3 meters in front of the main glass wall of the library as a barrier from the Western sun.

The purpose is for the ETFE façade to block a majority of the heat before reaching the main façade of the library, so that any redundant heat would dissipate within the 3m gap. This system still allows high levels of natural light into the building whilst keeping the library cooler.

Although functionality was the primary motive of the structure, the architectural intent was to be a distinctive piece of artwork that the local community would be proud of.

The ducting system for the cushions has been designed so that each cushion is connected to its predecessor, so that the air works its way vertically down the façade through each cushion. This removes the need for a large ducting system. The plenum sits neatly and discreetly along the top of the structure. None of the pillows sit independently.

The steel framing was adapted to lighten the overall weight of the structure with a custom profile, and RHS steelwork around the outside. The custom steel profile allows for connection details and specialised central node connections. Each connection where the corners of the ETFE cushion triangles meet are all different because the symmetry of the triangles is different.

The base material of an ETFE installation is very transparent. However, the ETFE foil can be treated in a number of different ways to manipulate its light transmission properties. These include printing, tinting, surface treatments, radiation and adding additional layers.

For the Oran Park Library façade, the ETFE cushions were made from red, yellow, white and translucent foil with a standard frit pattern print. Obtaining specialised ETFE colours for the yellow-gold and red pillows was complex due to the small amount of each foil required for the design. There is a lack of symmetry along the façade, meaning most pillows have custom dimensions and complicated nodes where they all meet.

The structural steel support system of the façade was specially profiled out of a folded plate so that the ETFE cushions could become individual. This simplified the node points and the cushion geometry by allowing them to become independent. This also allowed us to build the structural steel as one piece – horizontally – away from the façade, on jacks on the ground. We installed all the cushions and then lifted the façade into place in its entirety as one big piece.

This was all made possible because of the way we fabricated the steelwork.

The installation for the façade was quite unique. A plan was developed to assemble the whole steel structure/frame and ETFE cushions at ground level, then install it using one crane lift.

Some of the ETFE cushions were inflated before the lift which allowed for faster installation.

Everything went according to plan for the Oran Park Library project! The façade looks incredible, and the client was very happy with the result. The South-West suburb of Sydney has seen some tremendous economic, social and residential growth in the last 5-10 years, so it was exciting to be a part of the suburbs development.

The new Oran Park Library & Resource Centre is now home to a distinctively colourful ETFE façade that was designed to be an artistic solar barrier from the heat of the Western sun.