The Legacy of Frei Otto

The name Frei Otto (1929-2015) is synonymous with the evolution and development of lightweight structures. Otto exerted a huge influence on the industry by way of his visionary creative concepts, exquisite soap-film and other 3D models and, of course, his completed structures.

Otto was born in Berlin in 1925 and studied architecture there, before serving as a fighter pilot in World War II. The ravages of war created an enormous housing shortage in Germany and Otto considered using tents as a temporary solution. While visiting the USA in the early 1950s he was inspired by the construction of the cable-net roof at the State Fair Arena in Raleigh N.C.

Otto began his architectural practice in 1952. His early hypar or saddle-shaped stressed canvas tent for the music pavilion at the 1955 Federal Garden Exhibition in Kassel brought him considerable attention. He worked alongside the tent-maker Peter Stromeyer, and together they took the art of tent-making to a new level. No longer did tents consist of planar panels. Instead, the surfaces were made from strips, each cut to different patterns to reflect the end-3D shape and the stresses in the structure.  Many contemporary outdoor stage coverings use a variant of this doubly-curved stressed tensile form.

Much of Otto’s work utilized “tension – only” materials such as canvas and cables which when combined with a curved stressed surface produced amazing 3D forms. These shapes were often formed using elaborate soap film models where the edge boundaries were defined by thin wires. Internal points using needles and smaller loops of wire produced the dramatic cablenet forms of his 1964 Institute for Lightweight Structures (IL) at the University of Stuttgart where he served as professor. The IL was a highly regarded and creative research centre and produced many sought-after publications including several dealing with the influence of nature on structures. The Institute’s creative work, bridging engineering and architecture, continues to this day, now headed by Werner Sobek and a 30 plus team.

Frei Otto came to the attention of the world through his design of the German Pavilion at the Montreal World Expo in 1967. The large free-form cablenet structure had many internal masts creating stark high points. The forces in the cablenet were gathered up in his signature “tear drop” internal boundary cables which attached to the mast tops. A PVC coated fabric was suspended from the underside of the cablenet. 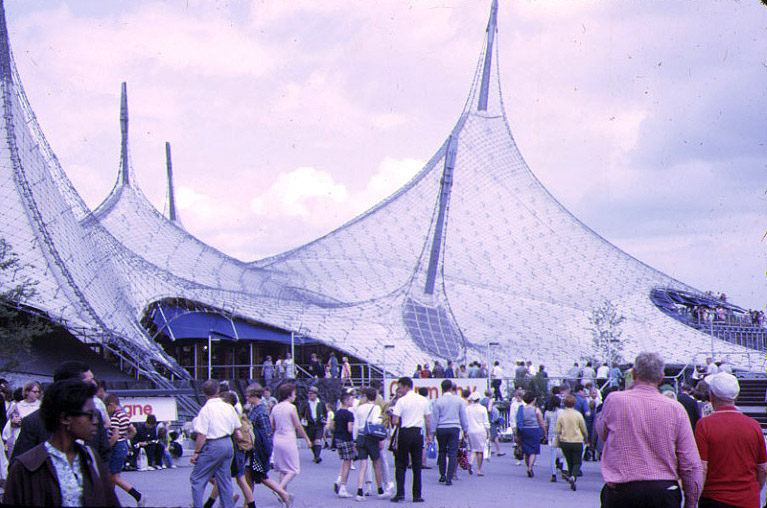 In this period Otto met Buckminster Fuller who designed the 250-foot diameter geodesic dome at Expo 67. Both Otto and Fuller strove for maximum efficiency with minimal materials. Otto looked to nature and biology for inspiration whereas Fuller favoured geometric forms and developed tensegrity structures.

Otto’s next major cablenet structures were various undulating roofs for the main arenas at the 1972 Munich Olympics. New approaches included very substantial inclined masts supporting internal points of the cablenets to provide vast clear-span spaces. Other innovative design features were the huge edge cable for the main stadium roof and the use of flying struts to provide the necessary high points to the saddle-shaped surfaces. The use of clear acrylic sheets for the roof cladding was a bold move given the very different material properties. He worked with the brilliant engineers Fritz Leonhardt and Jörg Schlaich. 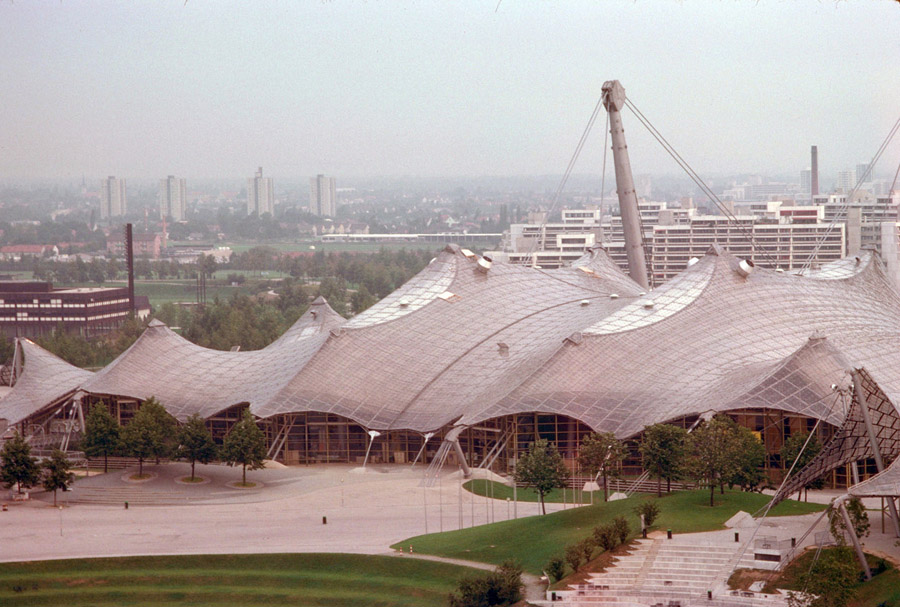 Otto also studied and produced several timber grid shells – the most noteworthy being the roof of the Multihalle in Mannheim 1970-75. In terms of form-finding, he developed models from small-sized chains (often made up into a uniform net first) that were hung from boundary points. Provided that all parts of the mesh were in tension under its own weight, then the process of inverting these forms would produce an efficient domed (synclastic) surface whose forces were predominantly in compression. The timber grid shells employed the idea that a square mesh could be collapsed into an easily transportable bundle to be later expanded on site and pushed up into a new form. The interior portions would have equal-length sides to the mesh but differing corner angles. Trimming would only be required at the foundations or around openings.

The Mannheim roof also reflected Otto’s long-time work on pneumatic structures. Again, the use of soap film models, where boundaries were defined and air pressure was introduced from one side, would produce a continuously changing 3D form which had uniform tensile stress. Otto also studied the intersection of soap bubbles.

Another significant structure is the Hellabrunn Zoo Aviary in Munich in 1980 in collaboration with Jörg Gribl and Buro Happold. It is a graceful stainless steel net supported by multiple internal masts that carefully grab hold of the delicate mesh with clamps so as not to impose high localized stresses in the mesh. Other aviaries such as Vienna have used similar forms. Buro Happold operated from Bath in the UK and was also a world leader in lightweight structures. Otto worked with Happold on the Diplomatic Club (now called the Tuwaiq Palace) in Saudi Arabia, completed in 1985. Another collaboration with Happold was the Japanese Pavilion for the Hanover Expo 2000, which tackled the use of paper as a construction material.

Otto also had a large and lasting impact on lightweight structures in Australia. One thread follows the activities of Vinzenz Sedlak who came to the University of New South Wales in 1975, having worked with Otto at the IL in Stuttgart. Sedlak established his own Lightweight Structures Research Unit (LSRU) where he encouraged students to explore structural forms through models. In 1981 he formed the Membrane Structures Association of Australasia (MSAA) which has since become the Lightweight Structures Association of Australasia (LSAA). Sedlak produced a range of structures including tensioned membranes, inflated pillows, timber grid and the demountable stage structure used in Sydney’s Domain each summer.

Through the LSAA, the industry provides a mechanism for designers and companies to share ideas and gain peer recognition. A crowning achievement was the holding of a top-class International Conference in Sydney in 1986 (LS86). At the conference, Frei Otto along with Walter Bird and Ryotuto Nohmura were made Honorary Life Members of the MSAA/LSAA.

Otto’s first name means “Free”, a word which encapsulates his creative ethos – he was unrestrained by conventional thought and continuously sought to explore form-finding with materials and construction. He often used nature as his inspiration. Frei Otto was generous and freely shared his ideas, thus inspiring many others.

Frei Otto died in March 2015, only a few weeks short of his 90th birthday. He was posthumously awarded the prestigious Pritzker Prize for Architecture.