S2C The Fabric Experiences at the London Olympics

The type of structures built for the recent London Olympics were radically different from those of the earlier Sydney Olympics. The facilities for both events were intended to be constructed in an "environmentally friendly manner". The Sydney structures essentially banned the use of fabrics whereas in London it was embraced.

Many of the London structures could be resized, relocated and reused - critical aspects of the conference theme "Touching the Earth Lightly".

The presentation will be given by Farid Sahnoune of Ferrari.

Read more: S2C The Fabric Experiences at the London Olympics

The presentation will cover the conceptual ideas behind choosing the waka as the perfect venue for this project including the Maori protocols with choosing such a design.

The reality and actual experience

In 2011 Creative Spaces was commissioned to design a cover for proposed new netball courts at Westlake Girls High School in Auckland.  This presentation will cover the design of the project from initial concept to the completion of construction. 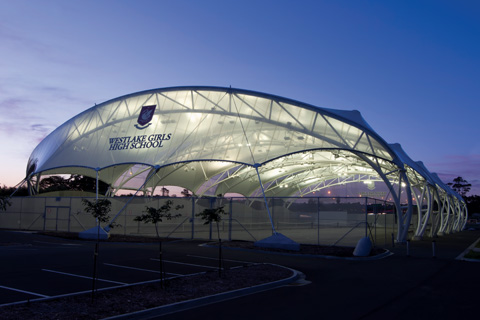 The presentation will be given by Harry Street.

The new 2000m2 double curved transparent roof, provides a stunning internal environment for sports and recreation, a presents new possibilities for aquatic centres in New Zealand. It’s the first example of ETFE being used on an Aquatic Centre in Australasia, and is attracting a lot of attention in the aquatic industry.

The presentation will be given by Toby Mason, Director of CREATE

Singapore’s National Stadium roof is the centrepiece of the Singapore Sports Hub. Once completed in 2014 this highly efficient structure will be the largest free spanning dome in the world with a clear span of 310m and a rise of 73m from the concourse level. The fixed roof dome supports a symmetrical movable roof that is in two halves and giant PTFE louvres. The thrust of the dome is supported by a post-tensioned ring beam.

The architecture of the cladding was clearly developed to express the design and geometry of the structure. To achieve a steel weight of 110kg/m2 over the footprint area of the dome required this cladding to be lightweight. A multi-layer ETFE pillow system was chosen for the cladding of the movable roof due to its flexibility, environmental performance and the ability to illuminate it at night. The giant hung PTFE Louvres provide a naturally ventilated concourse. The Louvre steel structure has been released in such a way that it does not try to support the thrust of the dome. 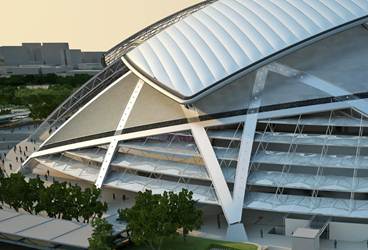