Getting to the Starting Point (Mansfield, Thursday 11am)

The “Maddog” AKA PeterK travelled down from Sydney via the Southern Highlands when he attempted to find the necessary(?) gear for the trip into the High Country. In an earlier year featured an impromptu “show and tell” session where all participants brought out their latest gadgets (café styled coffee machines, fancy knives, cameras on long poles and drones). This year the Maddog had trouble finding even the basic gear after a move to the Southern Highlands.

Running out of time he set off aiming to take some astro photos of stars in the background of the famous timber bridges at Gundagai. Being overcast he pushed onto to catch a few hours sleep in the back of the Defender at Holbrook. Next morning there was quite a lot of fog on the way to Mansfield where I arrived well ahead of the meeting time. Fuelled up ready to go I crawled into the Defender to get an hours sleep. No sooner than I found enough space to lie down the phone rang. It was Brian who said he was already having a coffee in the Bakery. So a shot of caffeine would need to replace an hour of sleep.

Brian had a great run up from Melbourne in his Jeep (new “rugged” tyres after the previous trip) and Rowan arrived shortly after (also new tyres). Bob and John arrived for a pie and coffee. Bob had kindly done a shop for supplies prior to the meeting day to avoid delays owing to a “committee” shopping expedition in the local supermarket.

Earlier in the year there had been very extensive bushfires in the Victorian high country and a vast area where we normally go to had been closed by Parks Victoria. We had waited as long as possible to see if some areas and tracks would be opened before our trip – but this was not to be.

Bob had suggested some tracks to the north of the closed areas so we headed off up the bitumen towards Whitfield before heading south up the King River valley. John was assigned the role of navigator in Bob’s Defender. Putting Bob in the lead (I am trying to groom him into the role of “Maddog”) meant that I could be “tail end charlie”. We both had good radios so true “convoy procedures” (Roger this – copy that etc etc rubbish) could be followed.

We turned east off the King River Road and down to our first and most eventful river crossing. Piece of Cake – very shallow, not wide, slow water etc. Except on the far side the exit had two deepish wheel ruts and both Brian and the Maddog tried to avoid but slid sideways into the embankment. Brian was to make an appointment with his panel beater on his return and the Maddog carried a bit of the embankment on the bull bar after rearranging a wombat hole. So 300 metres of off-road and this! Actually not that bad – we had a yarn we could tell, we found a nice camping spot on the other side of the river and so then lowering the tyre pressures we set off up the Long Spur Track.

No, there were no other incidents of that nature to report. 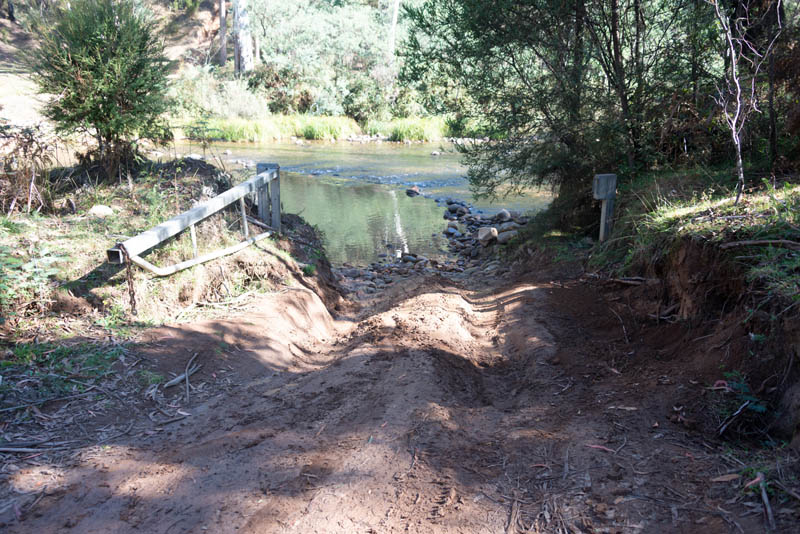 The first crossing where the front wheels got out of the ruts and re-arranged the wombat hole on the right. 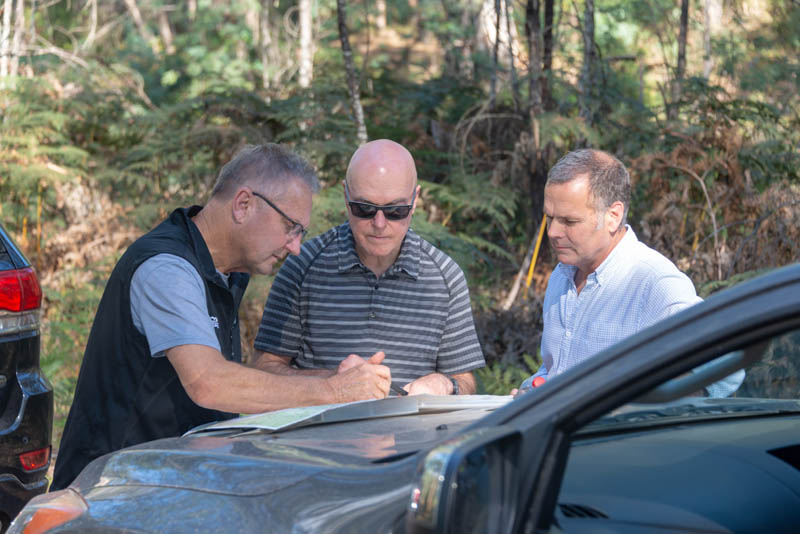 Cannot go anywhere without a committee meeting. Heading off up the Long Spur Track 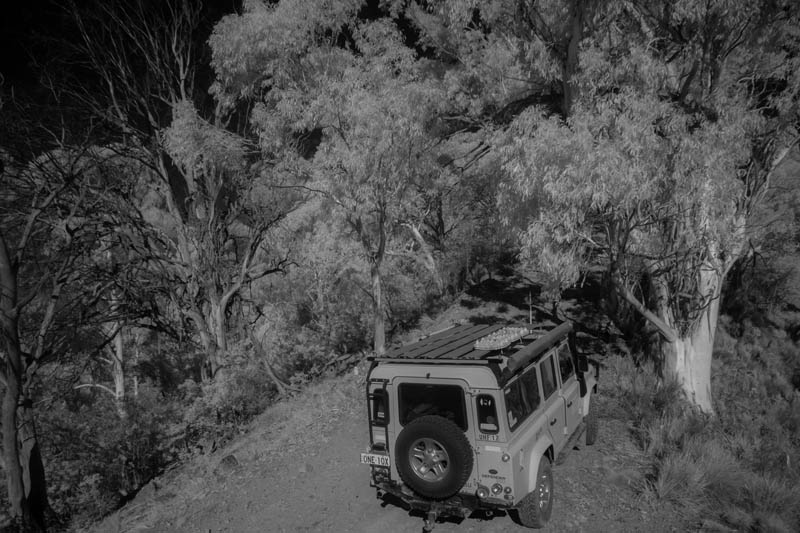 A great view from part way up the Long Spur Track. (Infrared photo)

The rest of Day 1 saw us driving south along Burnt Top Track and descending back into the King River valley along Basin Road. Another committee meeting followed deciding on a campsite 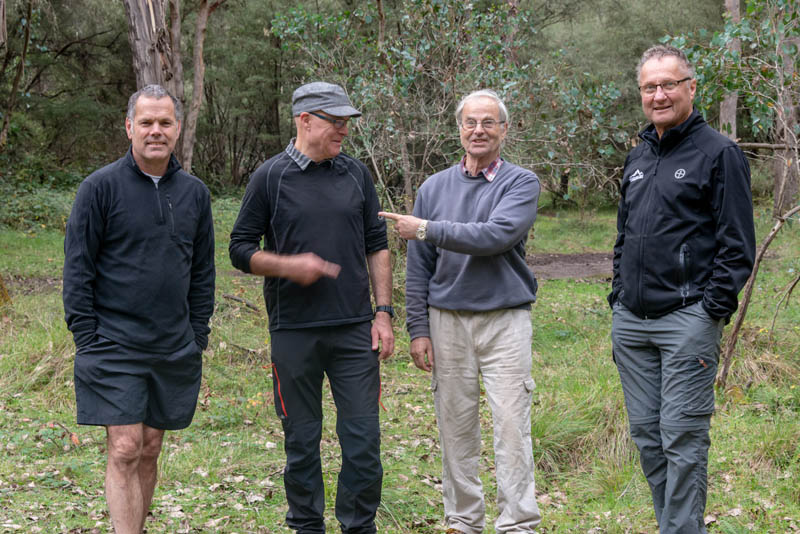 There had been quite a few occupied campsites along the King River but not as many as expected because of the closed tracks forcing visitors into the less popular areas.

The route today was to climb up the Speculation Track via the well known “The Staircase”. This section of the track is slow going simply to reduce the bumping from side to side as the staircase is climbed. 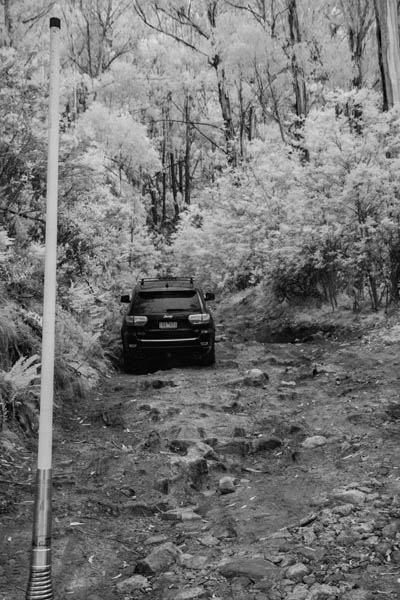 Brian going up the Staircase.

After the staircase, we drove out Speculation Track, past the Mustering Flat to the end. Here we came across some deer hunters as well as a local school support party dropping off supplies for their senior students who were spending a week or more in the bush. The main Australian Alps Walking Track is nearby and we hoped to get a view from Mt Speculation. Low cloud prevented a view so we returned and drove northwards to the Cobbler Plateau and a campsite we had discovered on an earlier trip.

All Maddog trips have included a walk of a few hours so we headed off towards Mt Cobbler along an easy graded foot track. Time was a bit short so after a while John and Brian headed back to set up the camp whilst Bob, Rowan and I pushed on to above the tree line near the top pf Mt Cobbler. The effort was rewarded by breaks in the low cloud and some extensive views. Some light snow on our descent. Going to be quite nippy that night. Bob opened his “Quarter Master’s Store” for jackets, gloves, beanies. He really does have some good gear!! 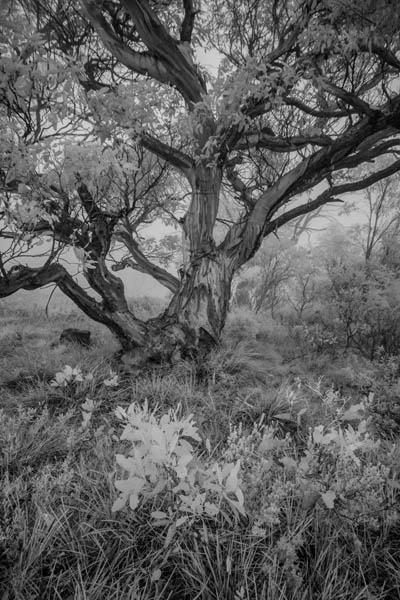 Infrared photo of a snow gum on Mt Cobbler 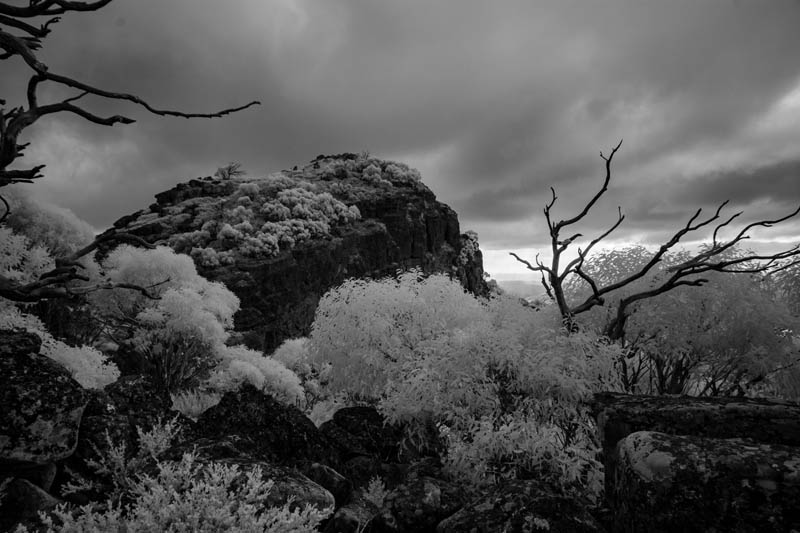 Summit of Mt Cobbler in the near distance. 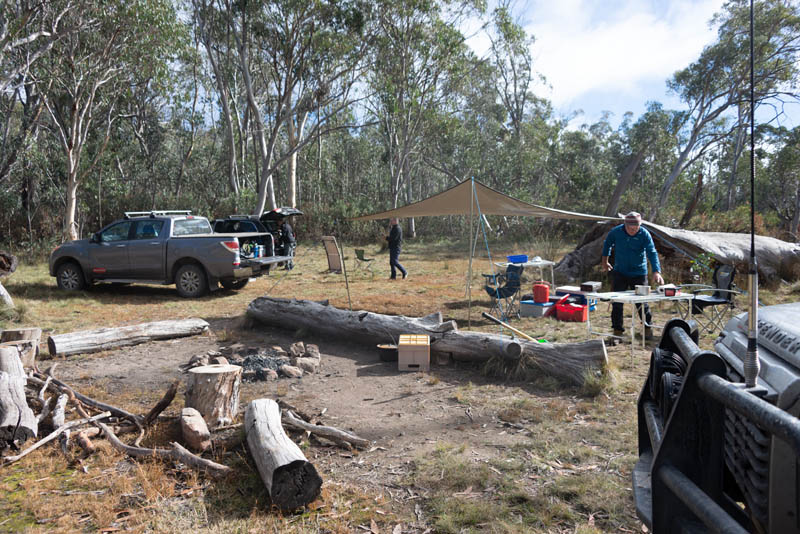 That night was on the cool side with temperatures dropping down to perhaps below freezing point. Nice campfire and suitable beers, reds and scotch (of course) helped.

After a “non-pressured” start it was a short drive north along the Cobbler Lake Track for a brief stop to enjoy the pretty Lake Cobbler. We had camped there on an earlier trip but this time the place was full of 4WD cars so we were glad we had stopped on the plateau a few kms to the SW. 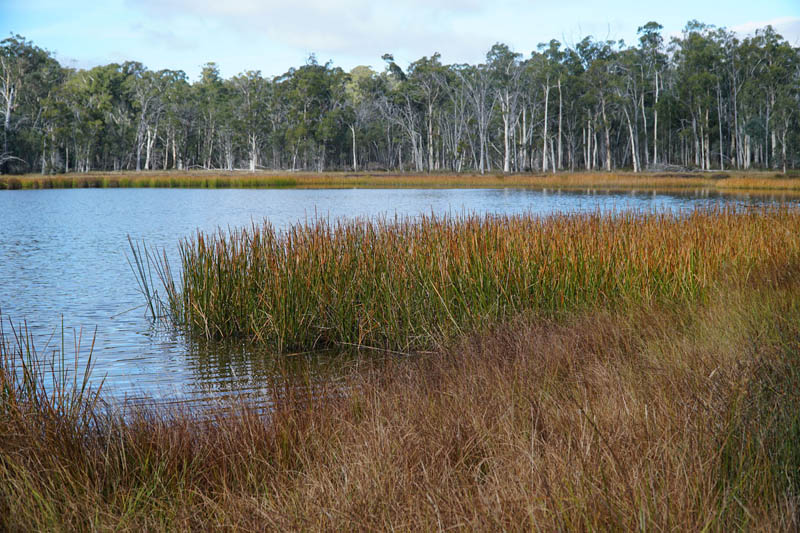 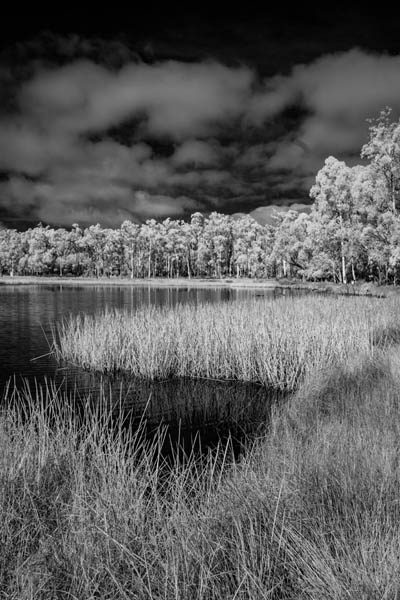 From here the plan was to cross NE down the Abbeyard-Lake Cobbler Track (which we had done on a previous trip) into the Buffalo River valley. Partly along this track we turned around as one of the climbs had become very gnarly. Brian would have appreciated this decision! So, a retreat and a big circuit around the Rose River Road brought us back to the Buffalo River near the Manna Gum camping grounds.

A short drop off the main road took us across the Buffalo River where the climb up the Durune Track met with the Mount Buggery Track which runs along the main ridge leading to Mt Buggery. At the Camp Creek Track we headed down and west to the Buffalo River where we found a spot for the night beside the river. No incidents, some more deer hunters passed. Maddog missed a gear change and stalled but being in the rear nobody was to see that senior’s moment. 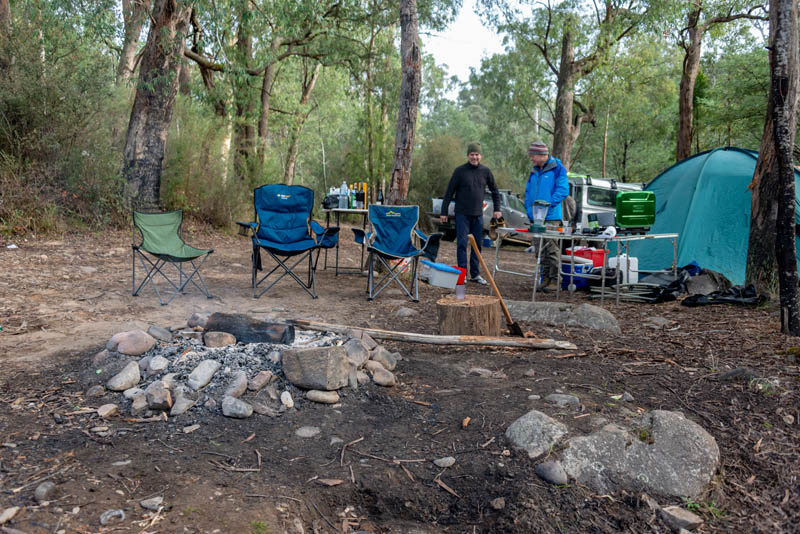 Buffalo River Campsite – we do it rough

Brian, now retired and therefore could do things that he hadn’t had a chance to do for a long time, got out his fly fishing rod for the first time in 30 years. Bob ignored his efforts and cooked up a magnificent roast lamb and vegetables in the camp oven. Did anyone have a few sips – I don’t recall.

Brian reliving his youth and the river at the campsite.

After breakfast, Rowan took the main road (2WD) north to Myrtleford get back home by mid-afternoon. The rest of us branched off and followed the recently regraded road under the transmission lines east from Dandongadale, skirting around just below the southern end of the Mt Buffalo massif and then down the Goldie Spur Track to the Buckland Valley. We stopped at the Rail Track Café in Porepunkah and enjoyed a great meal before making our separate ways back to Melbourne and north to Sydney.

We all agreed that future trips needed the four days instead of three as in the past.