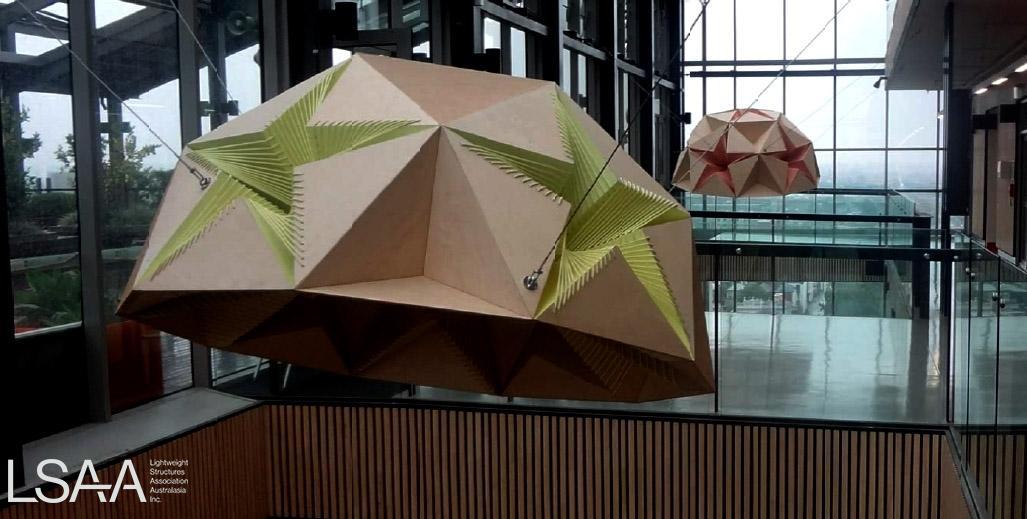 The implementation of form and function. The artwork is the form with the fall arrest netting being the function. 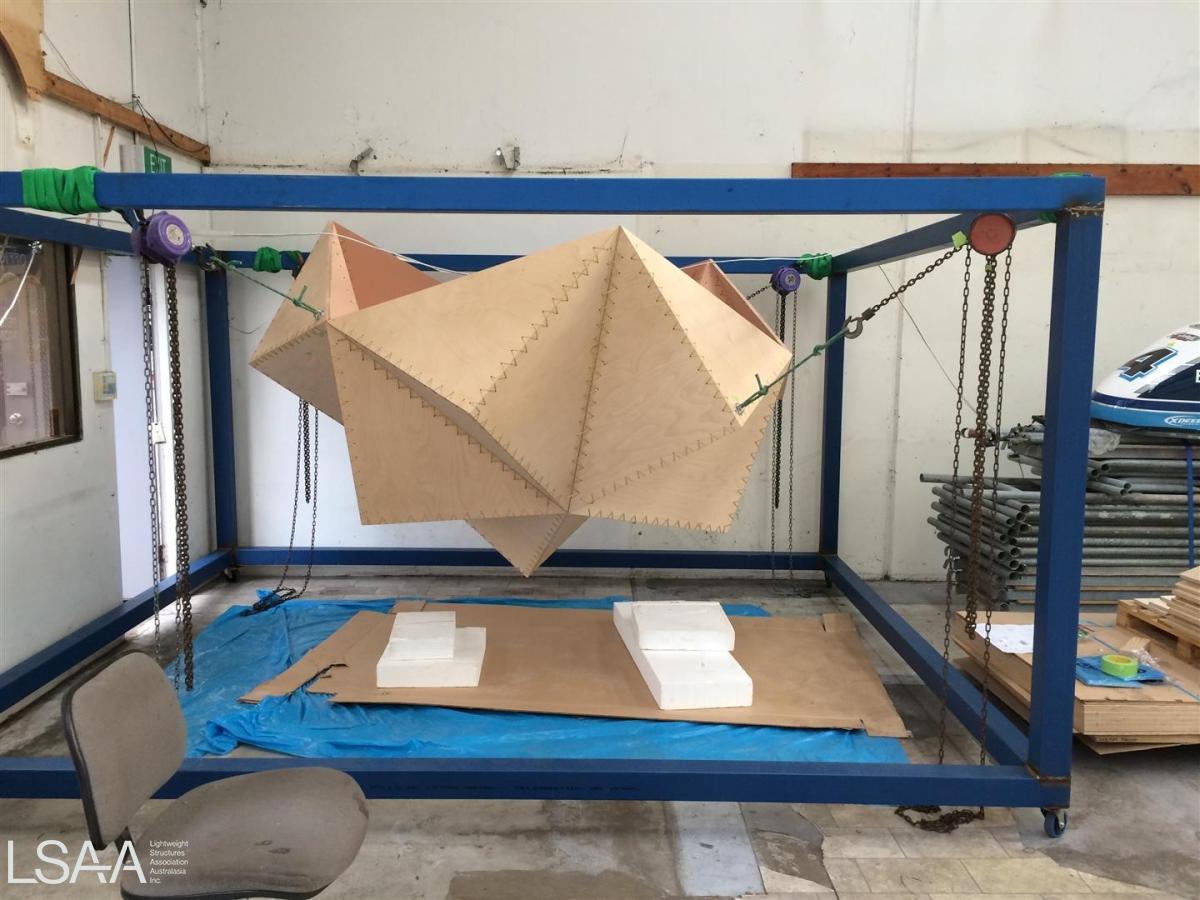 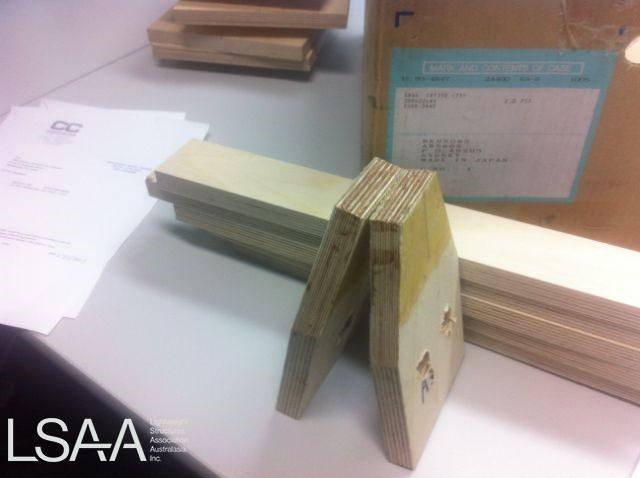 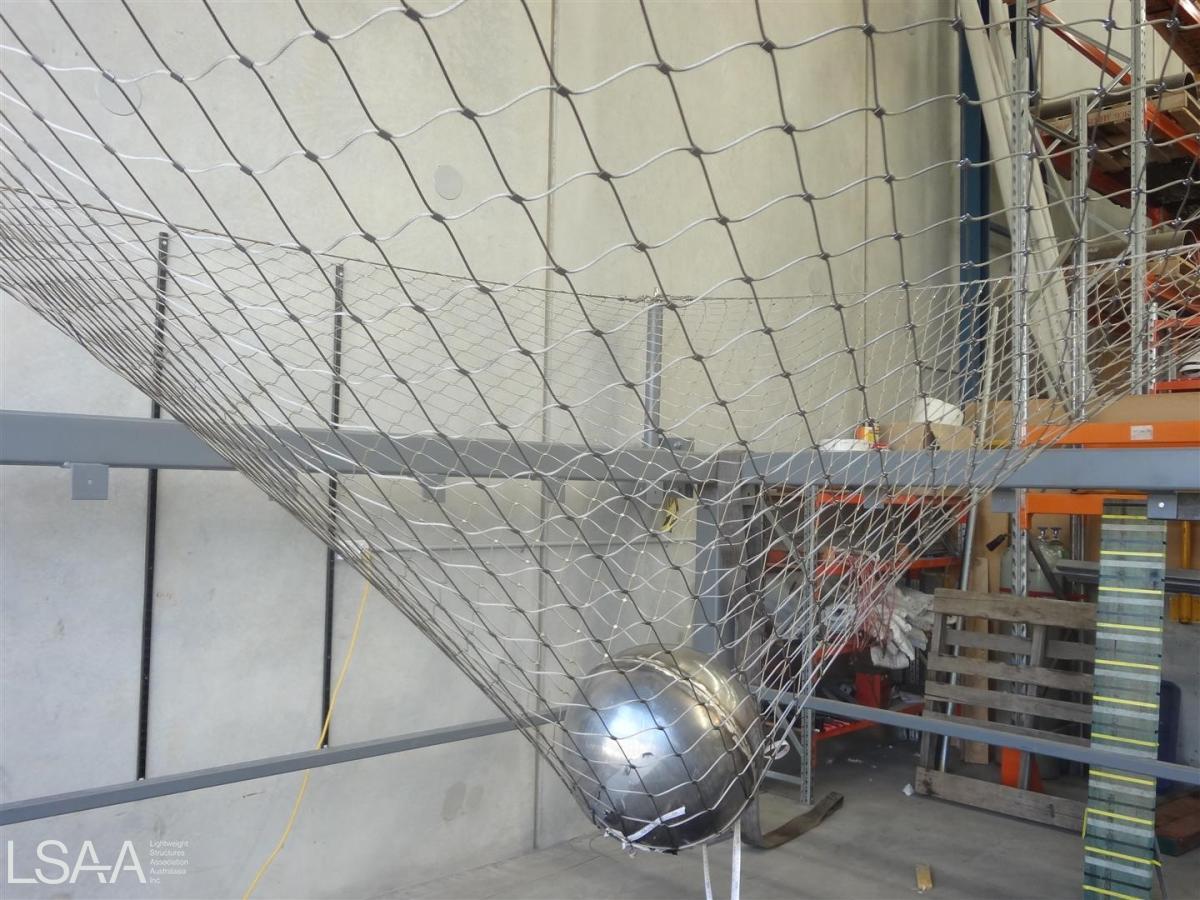 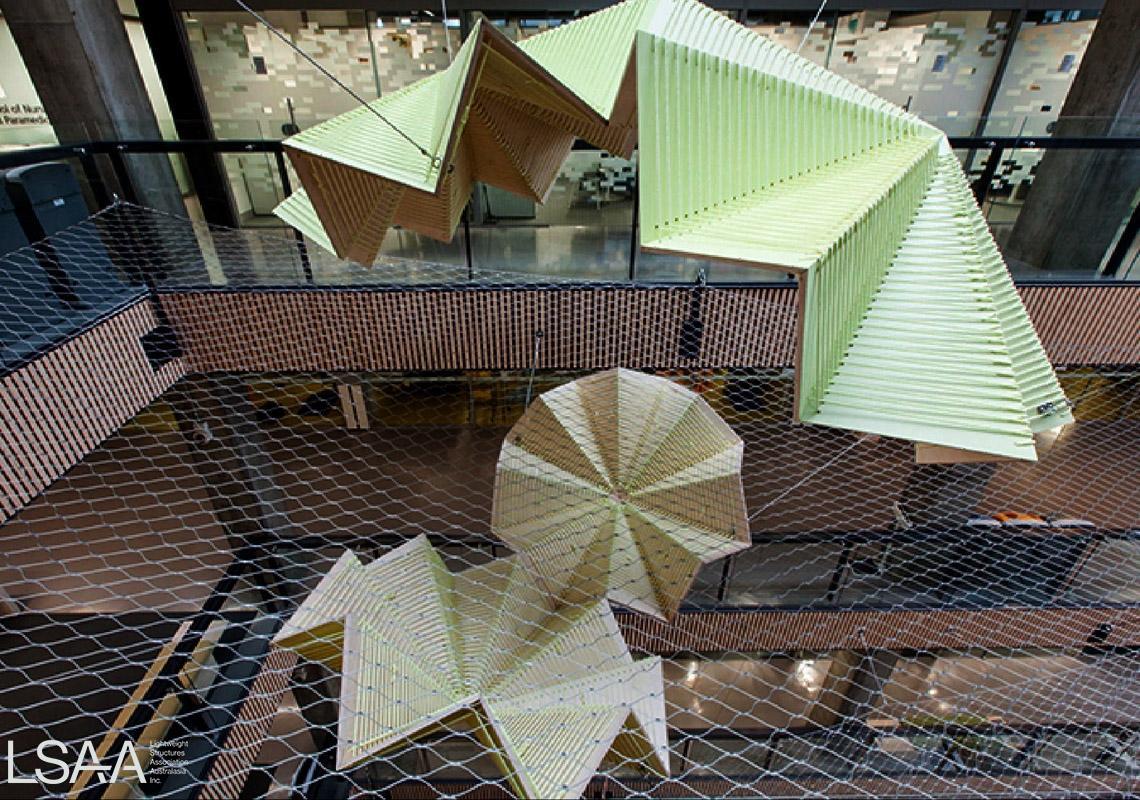 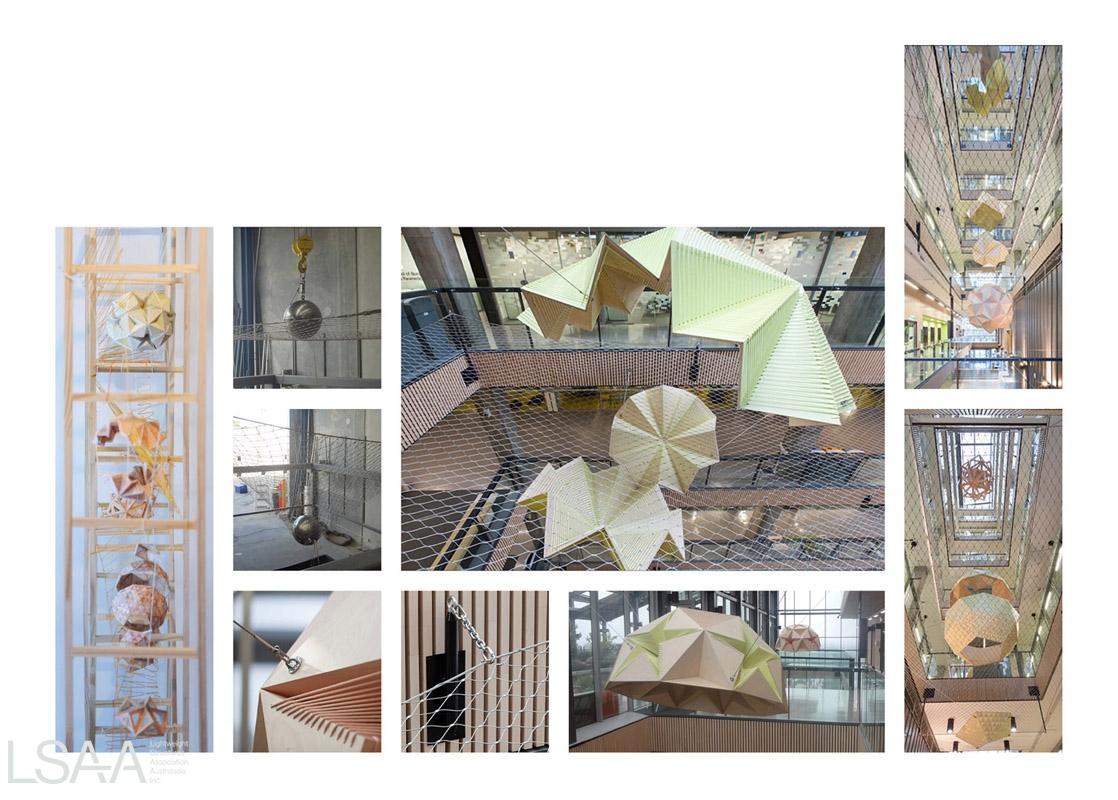 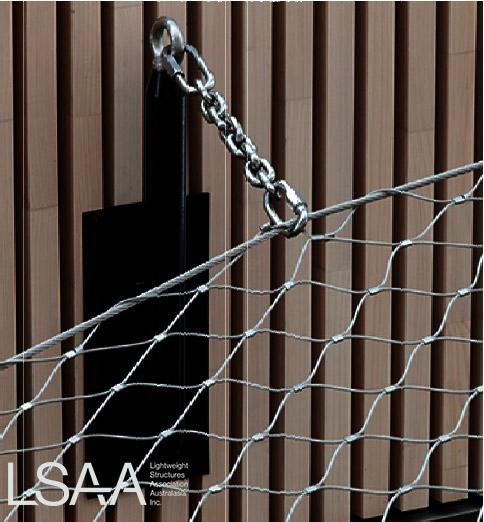 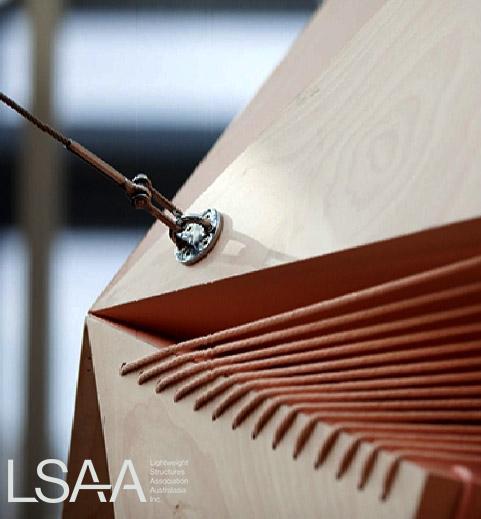 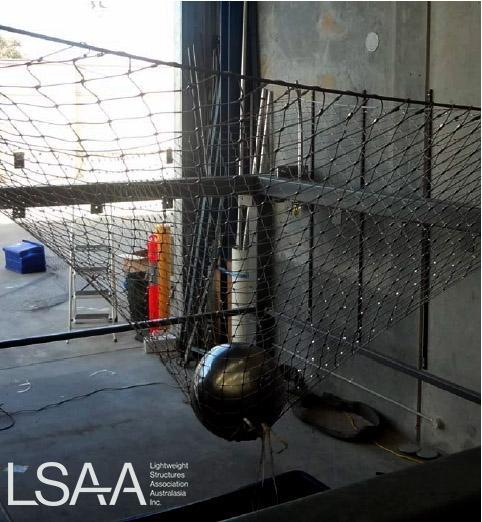 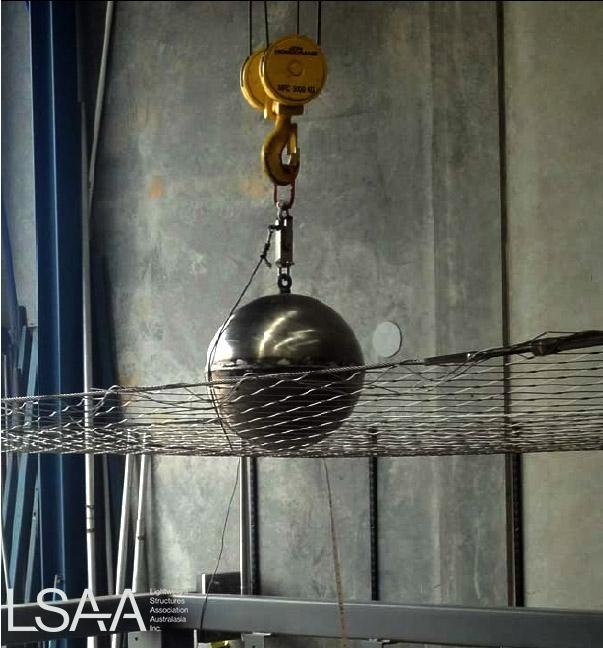 The Daniel Mannix Building is a major teaching facility for the Australian Catholic University completed in 2012.

Daniel Mannix (1864-1963), was Archbishop of Melbourne for 46 years and one of the most influential public figures in 20th Century Australia.

The nine storey building comprises two flexible floorplates separated by an atrium. Although there have not been any incidents, the University have become concerned that the atrium could present a health and safety risk from either large falling objects or at worst case, suicide. A feasibility study completed in 2013 examined either raising the height of the balustrades to each upper floor or locating safety nets within the atrium. It was concluded that raising the balustrades would have a detrimental effect on the look and feel of the building and safety nets could be less intrusive, because, if properly designed, the  nets could serve their primarily function of safety whilst also potentially enhancing the building, in effect making a virtue from a necessity.  Since the net(s) can be thought of as a site specific work of art, the University carried out a limited art competition to help take this forward.

Tensys were engaged by the University to review the competition designs and to work with the selected artist in achieving their vision.

The primary functional requirement is for health and safety but they want to achieve this as unobtrusively as possible. Thus, the net weave, geometry, colour and the introduction of other intermediate devices on or between nets are considered as part of the artwork.

Amy’s development for the Daniel Mannix Building public artwork is extrapolated from a previous sculptural work ‘Floating Sequence’ (see image below) where several lightweight geometric forms are suspended with the assistance of giant helium balloons.  For this concept she has replaced the balloons with the nets and tether lines causing the sculptures to appear to “float” through the space. These split geometric spherical forms could reference stars or planets and the nets could speak of their orbit. Star shapes appear in some of the sculptures as each form is constructed only out of triangles.

Unlike the helium balloons which will float, the split geometric forms need to be supported using a series of cables (attached to building anchor points).  It was also important to work out the centre of gravity of each sculptural unit.

The functional net were to interlace between these geometric forms but need to be able to absorb the energy from a person falling onto the net (without damaging the net).  Quite a fair amount of testing was carried out (dropping from various heights) to create a system of a tapered column that would yield under the impact load (absorbing the kinetic energy) and the net not failing at the same time.

However the plywood was designed to work with glued joints.  These needed to be tested to work out the strength of the glue.  Each artwork were also proof tested before installation

The Daniel Mannix Building was to be operational at all times.  This made construction and installation works to be carried out (out of hours).  The size of the sculptures also made it difficult.  Access had to be through a series of double doors through a lecture theatre.  Timing of delivery of sculpture were crucial for works during the night only.