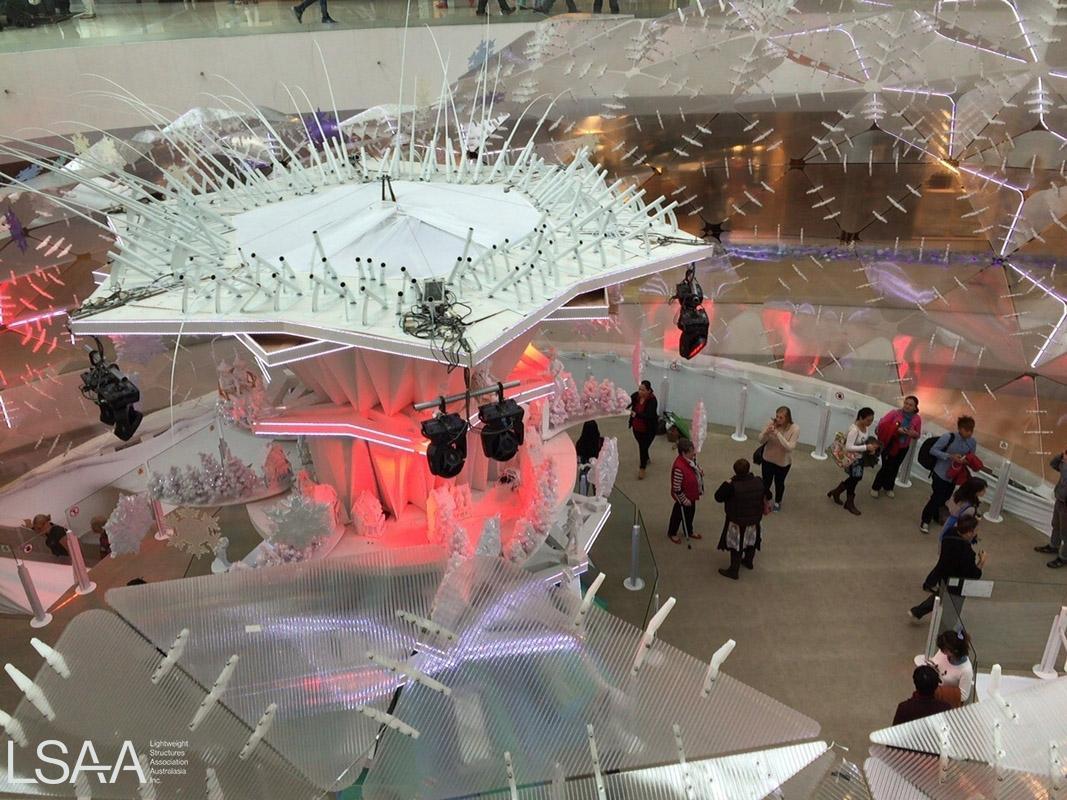 Creation of a structurally challenging temporary indoor feature to entertain and attract the public to a Hong Kong shopping centre at Christmas. 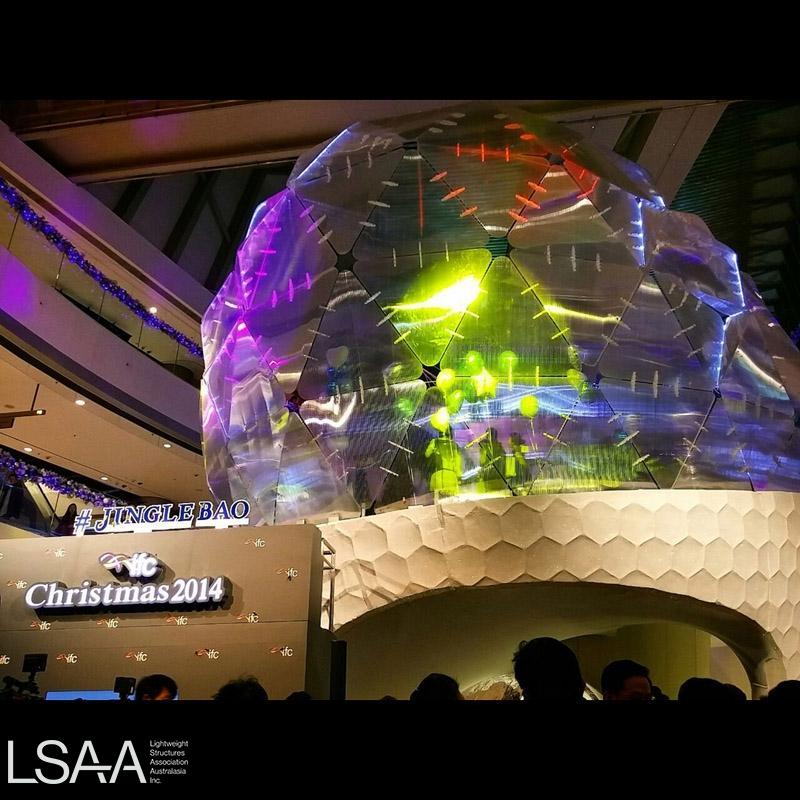 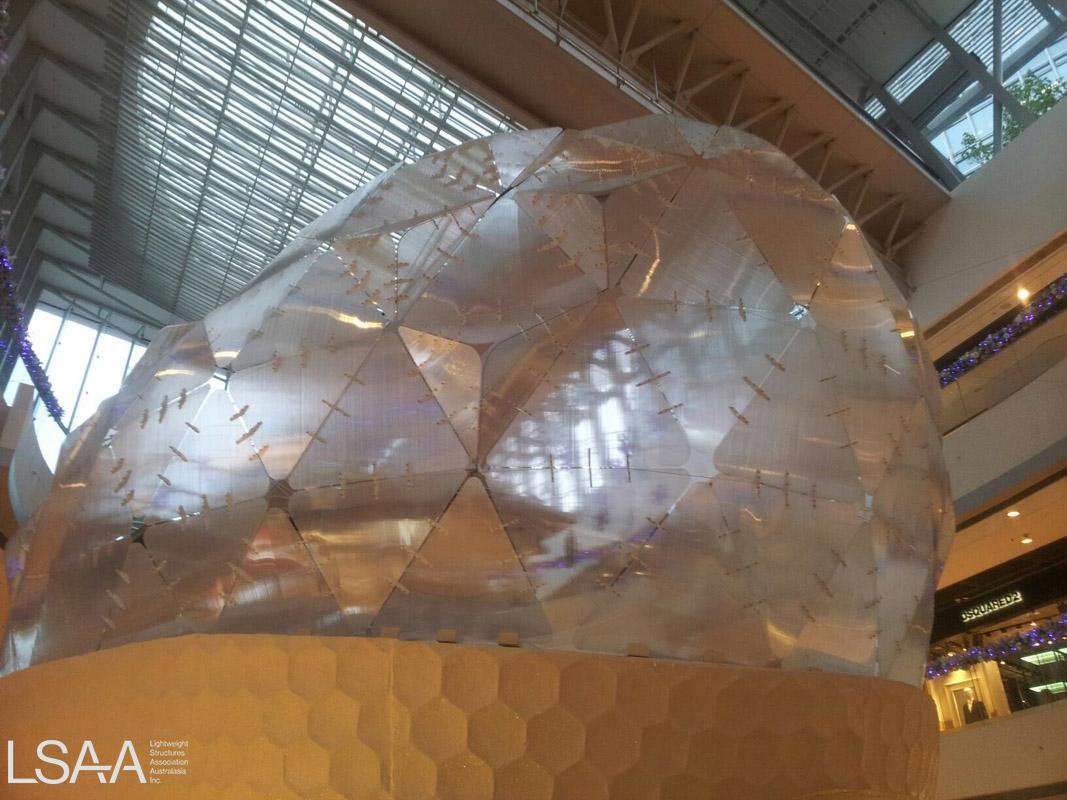 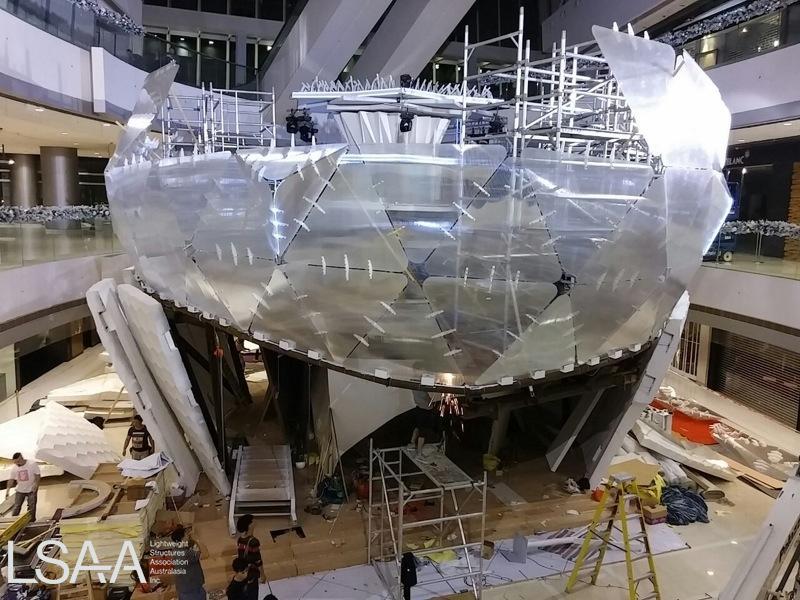 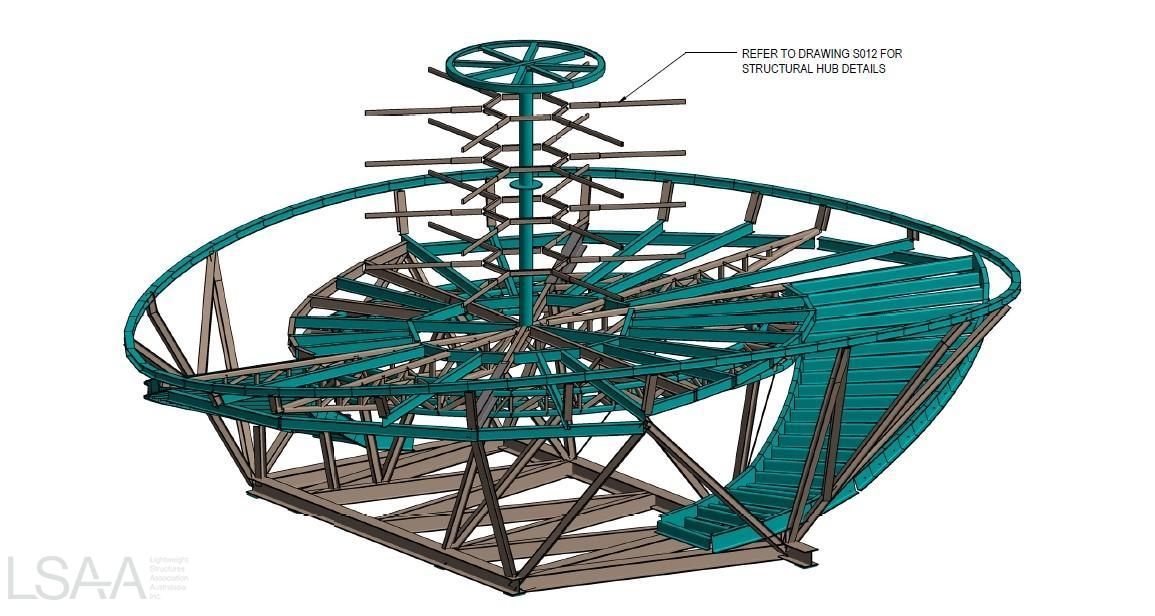 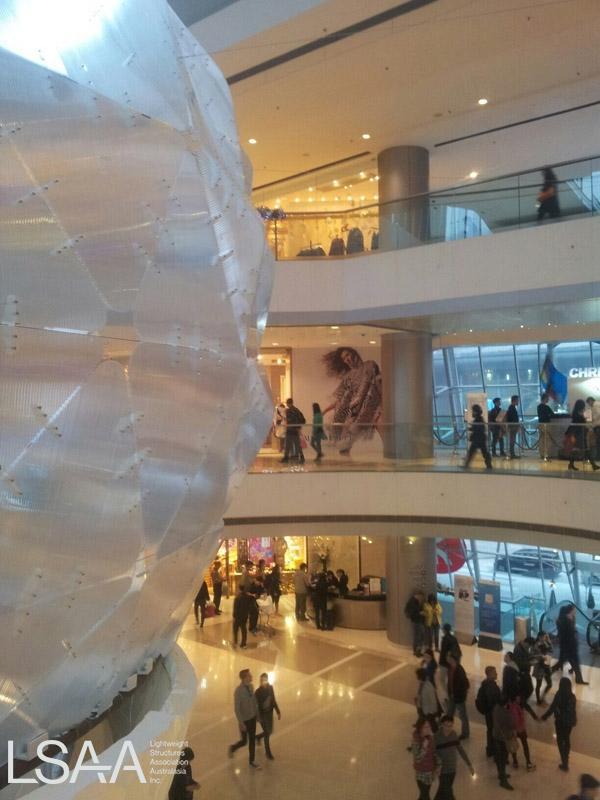 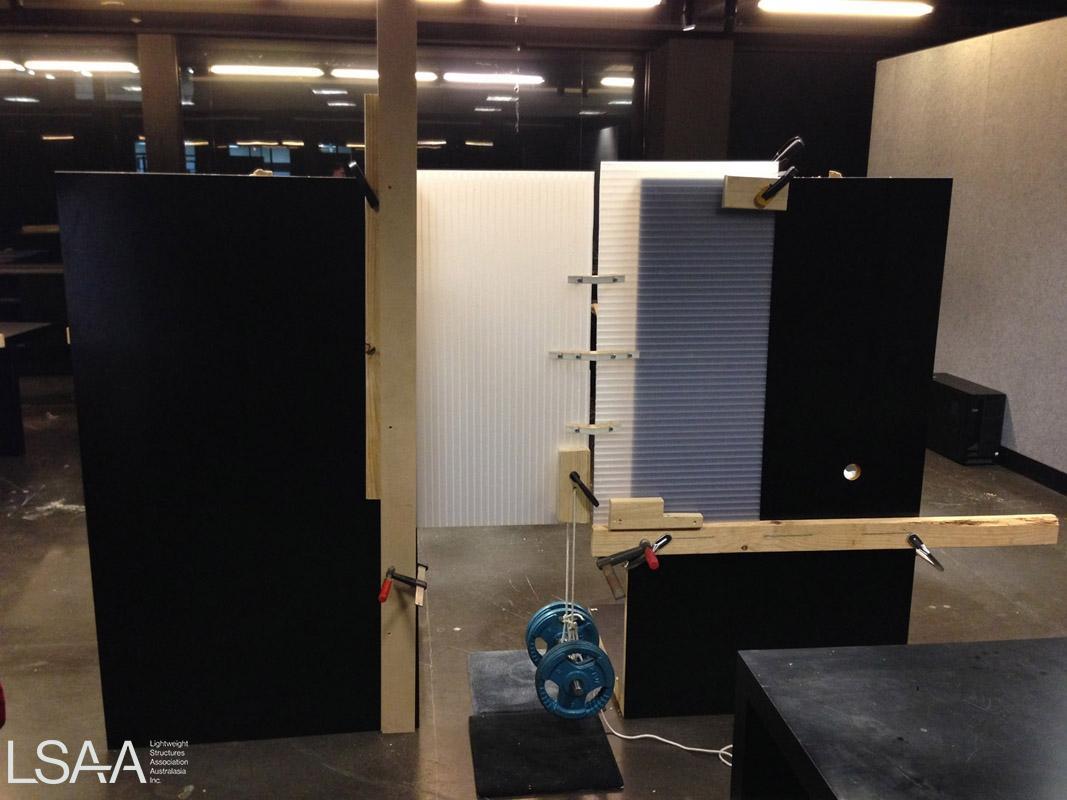 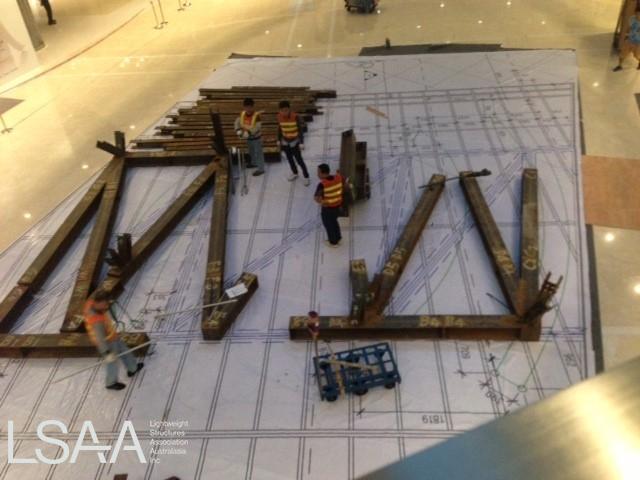 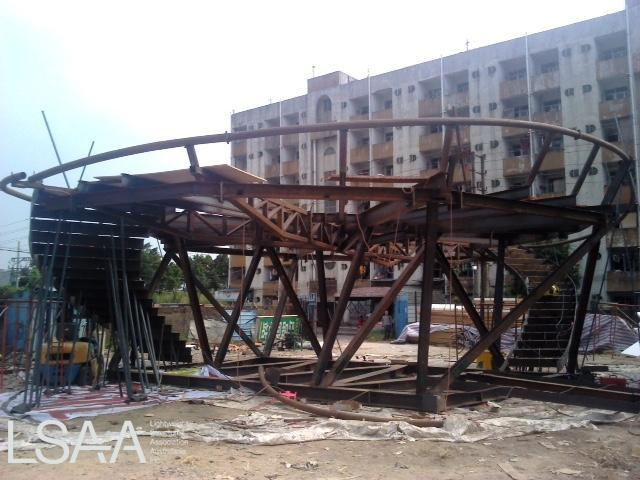 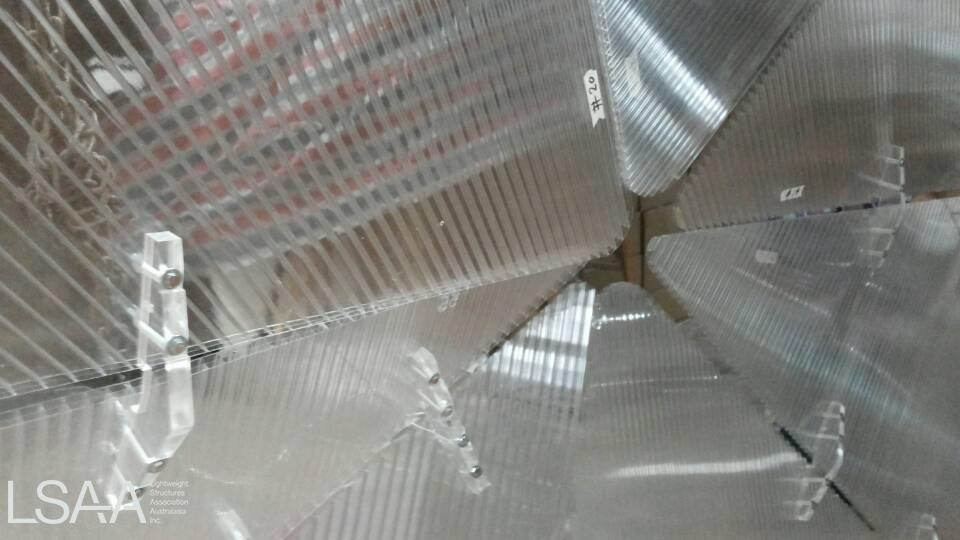 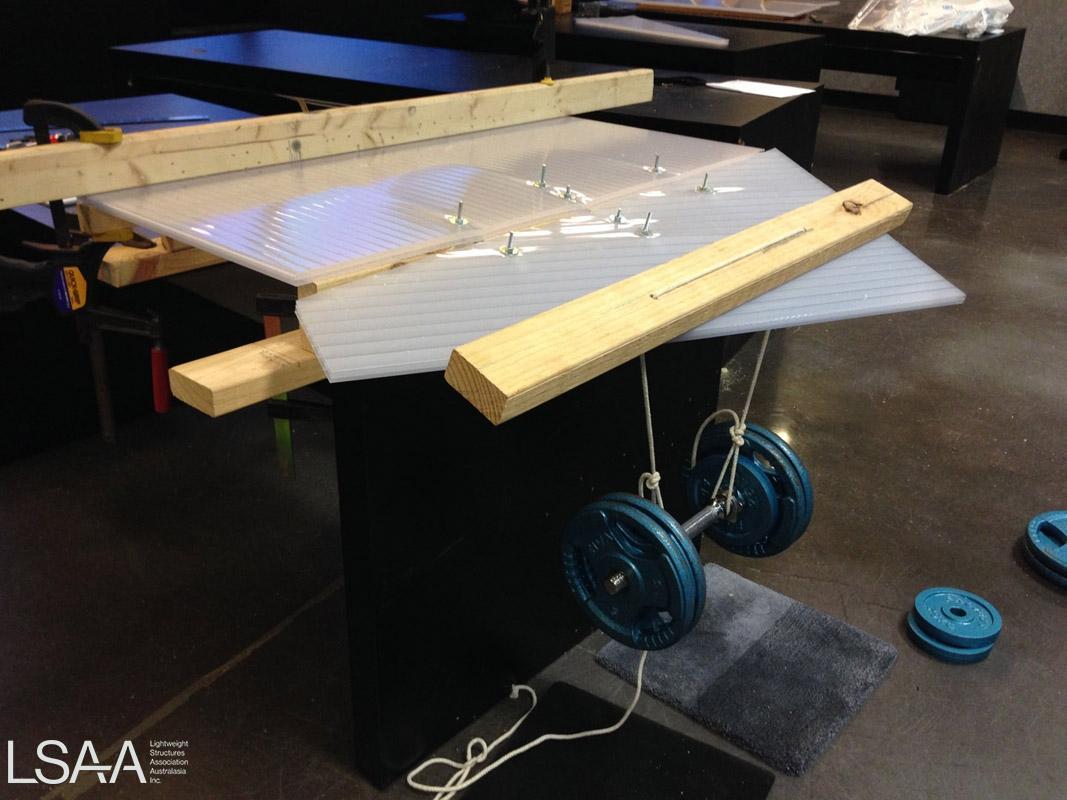 The Snow Globe Christmas Pavilion project involved creating a visually stunning temporary pavilion within the existing IFC Shopping Mall in Hong Kong. Standing over 12 m high, the steel-framed oval-shaped podium structure of the pavilion featured two curved staircases taking patrons up into a ‘winter wonderland’ deck level inside an ultra-lightweight translucent shell. This shell was, in fact, an asymmetrical toroidal dome supported by a suspended steel podium around the outside perimeter and an internal sculpted steel ring. Through a series of full-scale testing and detailed parametric modelling, the shell was able to be self-supporting, providing a total weight of structure and cladding of only 3.5 kg/m2.

The three main elements of the Snow Globe pavilion were the base structure, the podium structure and the Snow Globe structure. The base structure was required to distribute the loads into the existing floor. The existing Mall structure has a live load capacity of 5 kPa, so the pavilion concept was to restrict the loads onto the existing structure to this limit. This was done by stipulating that the area in and around the pavilion was continuously monitored and controlled by trained personnel, so that the simultaneous loads on the Mall floor and on the podium floor, when combined with the self-weight of the pavilion, did not exceed this capacity.

The podium structure was designed to allow people to walk around the central feature sculpted ring inside the Snow Globe. The architectural intent was to have a central clad trunk structure down to the Mall floor, concealing perimeter staircases, with a tunnel through the centre and feature sweeping cantilevers at each end. To achieve this, a series of sloping columns were hidden within the contoured cladding, with all columns supported on a base structure to transfer the loads to the structural concrete beams under the Mall floor. The sloping columns fanned outwards to reduce the cantilevers as much as possible. Whilst it had been stipulated that the number of people accessing the podium structure at any one time would be restricted, the design of the podium structure for strength was done to the full Code requirement of 5 kPa.

The feature Snow Globe ‘dome’ was constructed from lightweight 16 mm Lexan hollow-core polycarbonate sheets. Purpose-made laser cut connectors were adopted to join the sheets together. Typically there were two short and one long connectors per panel interface, each with a total of four bolts. To verify the capacity of the connectors and the Lexan sheeting a series of full-scale load tests were undertaken. A full 3D Finite Element Analysis was then undertaken to compare the actual forces at the panel interfaces with the tested capacities.

As the pavilion was located within an existing structure, a design criteria was that the individual elements needed to be transported to the site via the Mall’s service lift. This introduced a limitation on the length of any individual element to 2.8m. In addition, a requirement of the client was to avoid any site welding. The detailing of the steelwork therefore included numerous bolted splices to limit the length of members to manageable sections.

The brief for this project represented a daunting task. Awarded the project on 29 August 2014, construction of the Snow Globe had to be completed by early November – just 10 weeks later. Significant challenges included:

The unique and challenging structural system on the project was the polycarbonate sheeting and connections. Given the time constraints, our methodology was to tackle this problem on two simultaneous fronts. The first was to undertake a form finding exercise with the architect to optimise the shape, whilst also researching the material properties of the polycarbonate sheeting.

The architects had generated their proposed shape using the Rhino software. Navigating around this concept shell, it was obvious to our engineers that there were some ‘flatspots’ and some areas of tight curvature that were going to cause structural concerns. Working with the architect’s initial Rhino model, we modified the shape to address the obvious problem areas, and then imported the meshes and curves into Grasshopper software and Geometry Gym plug-in to create and apply plate and beam materials and attributes. This was then output to a Strand7 FEA model and analysed before further modifications and re-analysis in an iterative process, sharing the resultant Rhino model and refinements with the architect.

In this way, it was possible to refine the shape of the shell by identifying and eliminating (where possible within the architectural constraints) the highest stressed elements. By the very nature of the asymmetrical shape, we knew we were never going to get pure shell action and consequently, the individual plate elements would need to be able to sustain bending moment actions as well as axial loads. The final form adopted via multiple model exchanges with Elenberg Fraser was a trade-off between the desired asymmetry and the structural limitations of the material, as determined by the full-scale testing described below.

One design criterion in our favor was the fact that the Snow Globe Xmas Pavilion was a temporary structure to be built inside an existing shopping centre atrium. This meant that only nominal wind loads needed to be considered.

While the form-finding analysis and modelling was progressing, an assessment of the available design data was undertaken for the proposed polycarbonate material and it was quickly realised that this available data was insufficient for structural design purposes. The client, Elite Showcase, advised that fluted ‘Lexan’ sheeting was readily available in China and also Australia. Deciding that full scale testing of the material was required, the structural engineers sourced some Lexan sheets and, over the period of four nights, constructed test rigs and performed bending and shear tests.

Due to the fluting, it was evident that the material did not have homogeneous properties. It was therefore essential that testing be undertaken parallel to the flutes, perpendicular to the flutes, and at other angles so that the design criteria could be established. Similarly, it became evident that the ‘strong direction’ for every single sheet in the shell would have to be documented. A testing procedure was established, and loads incrementally added to establish an ultimate failure load and an elastic limit for each of the tests.

In addition to the properties of the Lexan sheets, it was important to understand how the loads could be transferred between the sheets, noting that the asymmetric shape of the shell meant this would include both axial and bending loads. This also necessitated testing of the connections. Samples of the 20 mm solid polycarbonate brackets were sourced, and various configurations of these were tested (either two brackets or three brackets per joint) in both bending and shear.

It was identified that a combination of short and long brackets was optimal, and a standard connection featuring three brackets (with one long bracket central and a shorter bracket either side) adopted so that linear kinks could be avoided.

Following completion of the testing, the design criteria were established and fed back into the analysis model, and each individual element was checked against the determined capacities. In some instances, modifications to the geometry were required, and at some very local ‘hotspots’, five brackets were used in the connections to transfer the loads.

Ultimately, it was determined that the preferred architectural shape where the sides curved past vertical and cut under the upper shell on the ‘high end’ was not achievable with only the Lexan sheeting and the brackets. Since the architect was adamant that this undercutting was essential, three 4 mm wire circumferential cables were added forming a ‘girdle’ around the base of the structure, as indicated by the red lines in the first image in Figure 4.

While testing and modelling of the shell structure was underway, the design and documentation of the steel base structure also had to progress in line with the extremely tight timeframe. This needed to be designed for fabrication from readily available steel sections, in segments typically no longer than 2.8 m to fit into the shopping mall lift.

As noted above, the most unusual material used on the project was the polycarbonate sheeting and connection brackets. This was selected to provide the visual appearance desired by the architect, and for its light weight. A single 16 mm Lexan sheet was adopted, as this was readily available in the tight timeframe. An 8 mm sheet was also available, and although the structural engineer’s preference was to use two 8 mm sheets with the flutes in different directions to provide similar properties about different axes, this was not accepted by the architect. The Lexan material was not intended by the suppliers to be used in the required way, and as such the detailed design properties were not available. To overcome this problem, a series of full-size tests were undertaken to determine the product’s properties. As every individual panel of Lexan sheet was different, each one was individually marked, and drawings produced to show the direction the flutes had to go and where the sheet went in the structure.

For the base and podium structure, a steel frame was adopted with a timber decking to minimise the weight. Due to the unique shape, only one vertical column could be located. All other columns and braces were sloped to fit within the lightweight contoured polystyrene skin. The egg-shaped perimeter of the podium structure and the location of the existing columns under the base structure led to cantilevers of up to 4 m being supported by other cantilevers.

All aspects of the design were focused on how the Snow Globe could be fabricated in the shortest possible time. The construction of the project needed to have minimal disruption to the shopping centre’s critical Christmas shopping period.

As a result, with each individual Lexan panel being a different shape, each one was engraved with its identification number, enabling them to be quickly identified and installed in the correct sequence. Tight tolerances on the Lexan panels were critical. Due to the unique shape of the asymmetric toroid, one out-of-shape panel (or an incorrectly oriented panel) would cause flow-on effects to the rest of the structure. Similarly, every bracket was engraved with its position number to ensure the angles between the panels were correct.

Due to the complexity of the base and podium structures, and without time for the usual shop drawing process, the steel fabricator elected to enlarge the structural engineer’s drawings to 1:1 scale and build directly over the drawings!

The collaboration on this project was intense and a key contribution to the highly successful outcome. From the date of the structural engineer’s first involvement, the programme required that the Snow Globe had to be operational in just 10 weeks. This required significant collaboration between:

As noted above, everything was trial assembled before coming to site. A restriction on the site was that all elements were to be designed so that they could fit within the 2.8 m goods lift, or be able to fit through a set of double doors. Although this restriction was relaxed for some essential elements for which there was not an alternate route, most sections of the structure were segmented to this size. Additional restrictions were that machinery was not allowed in the shopping centre and, even though the Snow Globe structure had large cantilevers and an asymmetric shape, fixings into the existing tiled floor were not allowed. Similarly, welding on site was not permitted.

This was the one issue that did not need to be addressed. The installation was to be in place for only three months, and then disassembled. The restriction of not allowing fixings into the existing floor, and no welding on site meant that, once removed, minimal remedial works to the existing shopping mall floor were required.

View a PDF Version with Diagrams