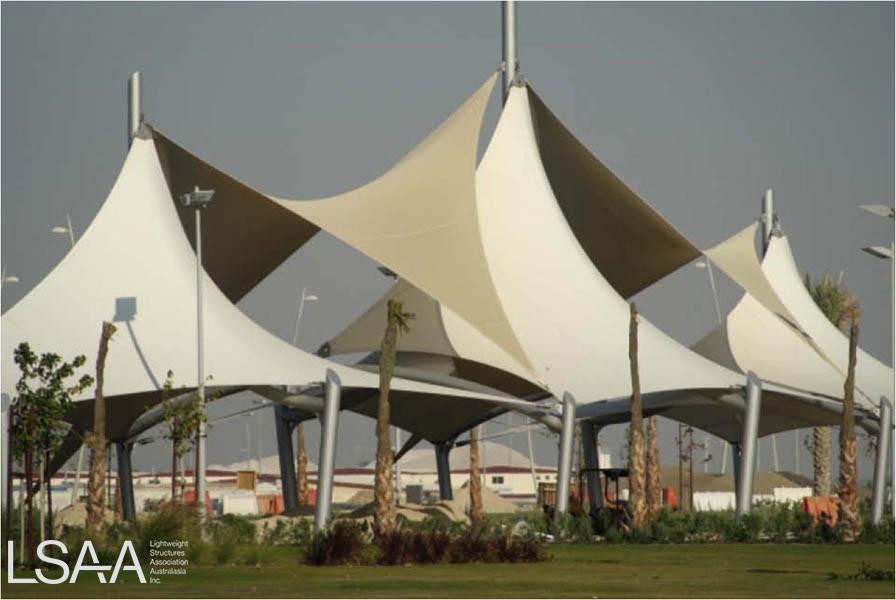 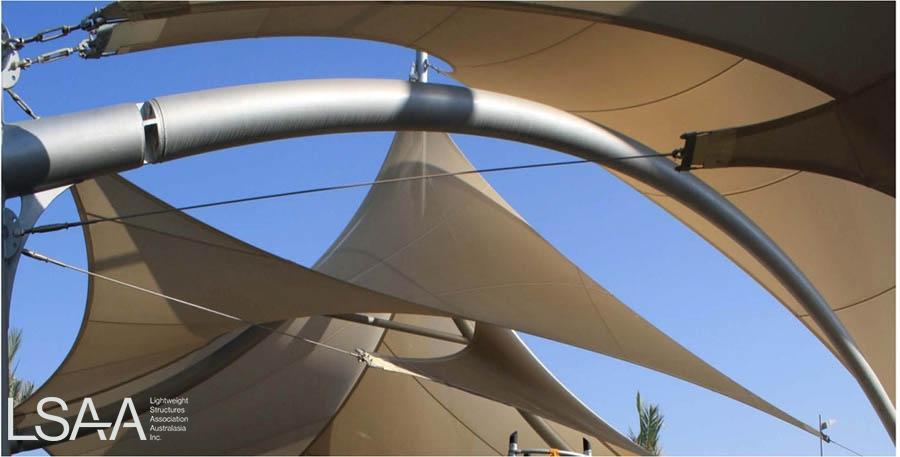 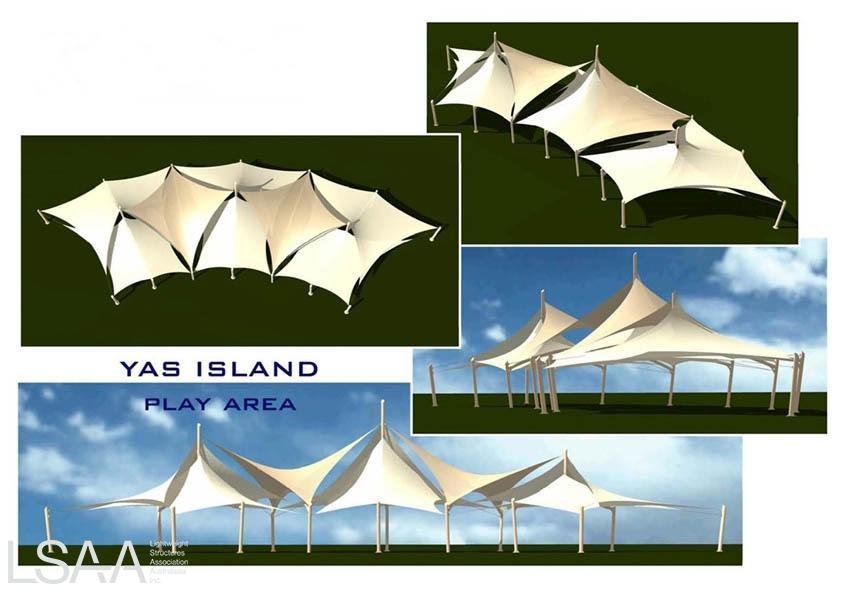 The client wanted to create an architectural centerpiece for this landscape area of YAS Island. The client’s architects wanted to move away from the formality of the existing urban design scheme and create an eye-catching architectural feature in a natural landscape setting. The project site was part of extensive landscaping within the YAS Island development located near Abu Dhabi in the United Arab Emirates.

Taking inspiration from the triangular YAS Island logo the project architect put forward a conceptual drawing illustrating triangular sails in the three project areas. Recognizing the opportunity to create an architectural centerpiece as determined in the client design brief our company initiated an alternative project offering.  This style of structure utilized exaggerated highs (10.5mts) and lows (3.0mts) emphasizing the canopy formation which consisted of interleaving sails supported by structural steel work which exactly followed the profile of each individual sail. This system of design was utilized to minimize material usage such as the support columns and foundations and to create the illusion of the high points of the sail seamlessly floating on the horizon with clear span space underneath the structures. A conceptual drawing supported the evolved design demonstrating the functional and aesthetic value of the new proposal. The design was well received by the project architect. Over a six week period the parties via internet collaborated refining the design to a point where all parties, Designer, Engineer and Architect were confident of the aesthetic and functional value of the project.

Collaboration between the working parties was essential to the success of the project: The project located in the United Arab Emirates was built for a Middle Eastern client. The Design and Engineering was undertaken in Australia with consideration for regulatory controls including local building codes, local site conditions. The steel fabrication was facilitated within Abu Dhabi. Importantly in the early design phase our company requested a schedule of all available steel sizes which could specified for the structure. The fabric fabrication was facilitated in Sri Lanka (PTFE) and Australia (Shade Cloth). Project Management for installation of the fabric sails was undertaken by Australian personnel flown to site with the support of local labor. Steel fabrication was facilitated in the UAE with significant interaction and support from our company the Australian Design/Engineer. Cable and Connection components were manufactured in Australia.

The design wind speed for the site is 160km/hr. The soil type is sand, with fill at each foundation position. The foundations are large pad footings with hold down bolts. A site surveyor set the hold down bolt positions to ensure accuracy. The majority of the steelwork was fabricated in an offsite factory, with the longest sections site welded.

Monotech Shade Fabric Chino Cream and Karloo Sand selected due to the fabrics structural stability. PTFE Fiber Top C1008 Fabric was utilized on the BBQ structure. PTFE was selected due to the fire rating characteristic. Steel supply and fabrication was sourced within the UAE steel gr 355. Stainless Steel cable and rigging sourced from specialist supplier within Australia ensuring component met the specification outlined on the engineering documentation.

The Monotech shade cloth sails were patterned in accordance with known predetermined stretch percentage. The PTFE sails were patterned in accordance with the stretch percentage obtained from biaxial test results of fabric samples taken from the fabric rolls used for the project. On site at Yas Island the hold down bolts were installed to a tolerance of 5mm spanning a distance of eighteen meters. The accuracy in positioning the hold down bolts was achieved by engaging a site surveyor. The majority of the structural steel was fabricated and painted within an off site factory. The joining of the large structural members was achieved by accurate set out on site and site welding.

The project team consisted of five parties: Client, Landscape Architect, Certifying Engineer, Main Contractor, Marketing Agent and our company who held the role of Design/Engineer developing the initial concept and managing the design documentation for the project to turnkey completion. Collaboration between the parties was essential as each design revision required approval at all five levels.