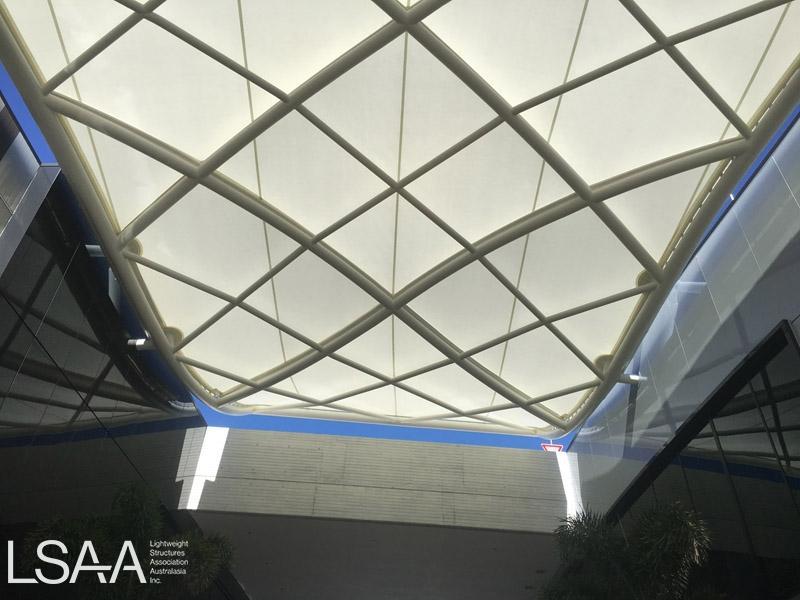 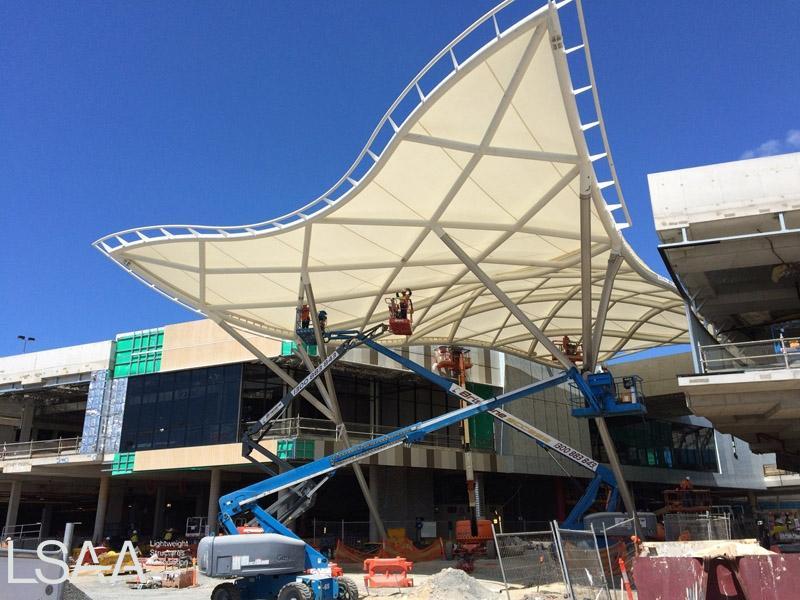 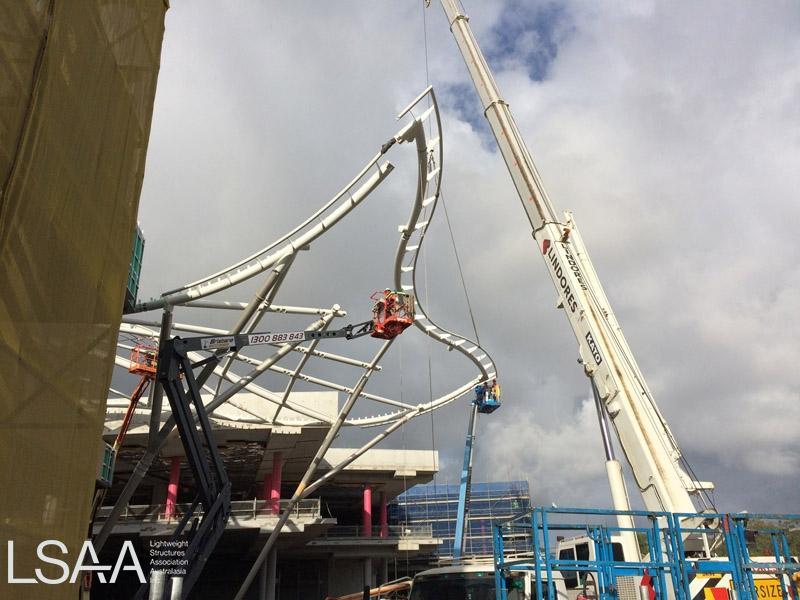 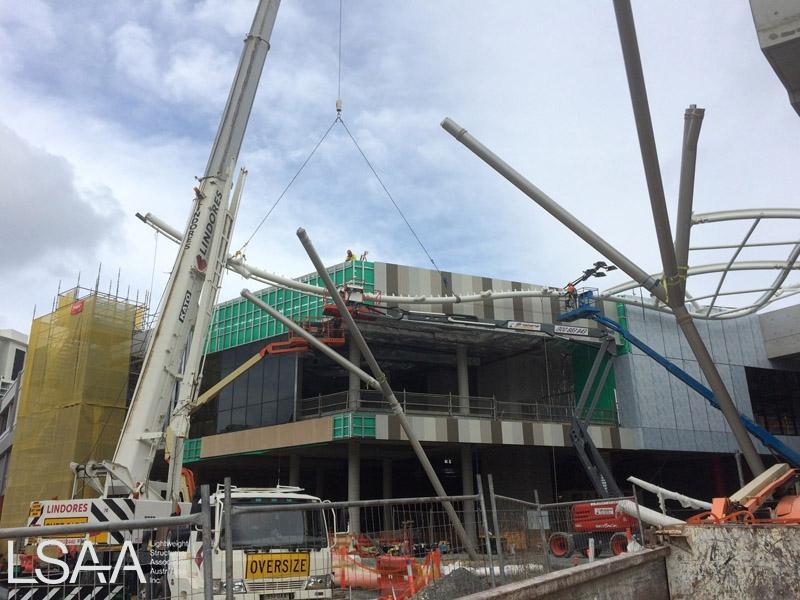 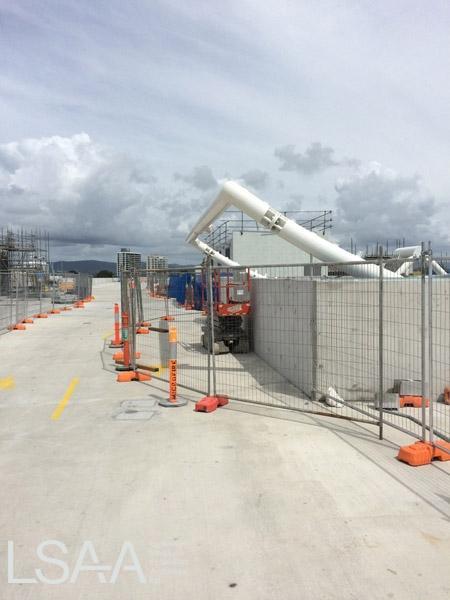 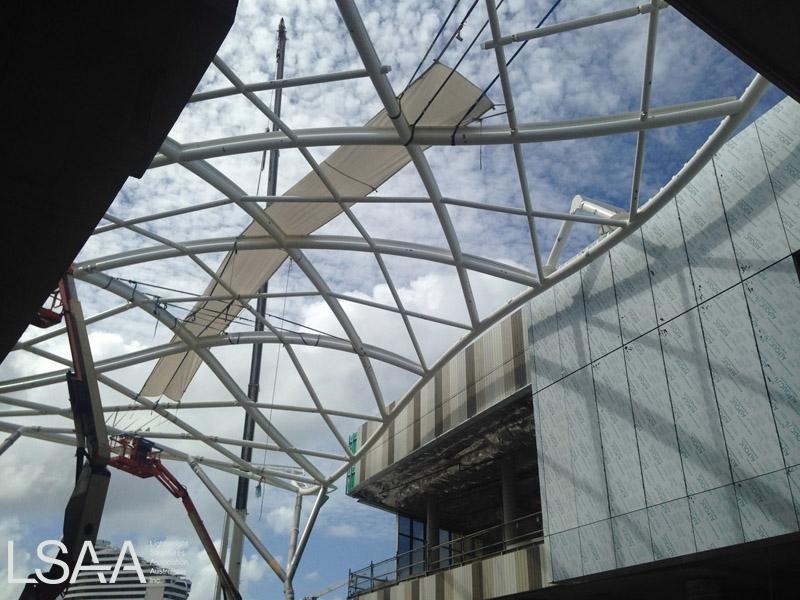 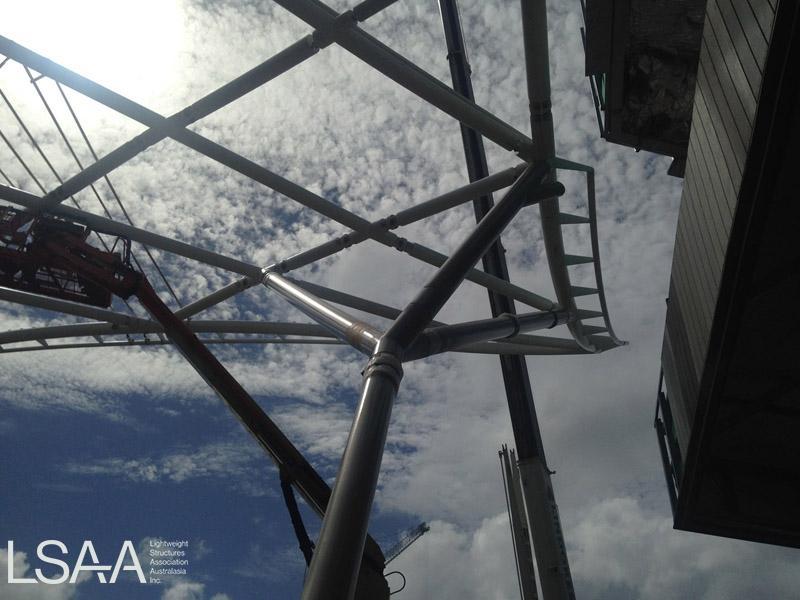 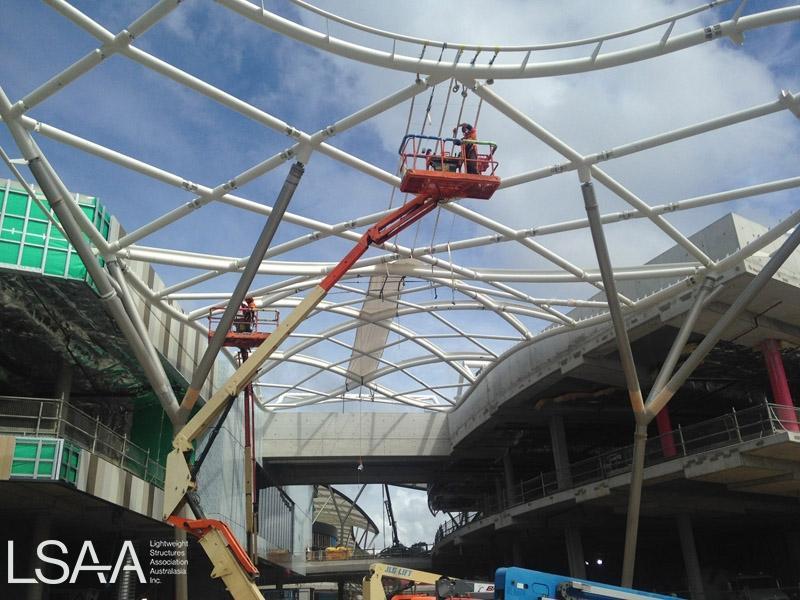 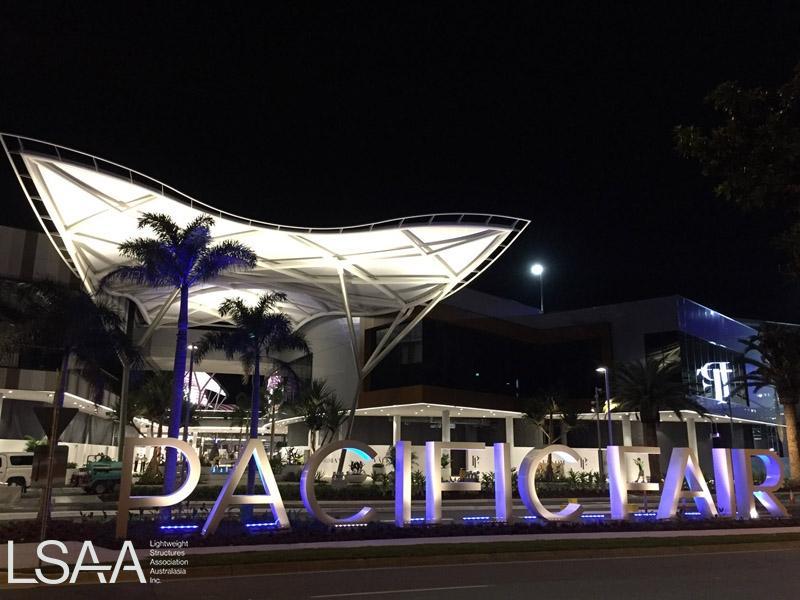 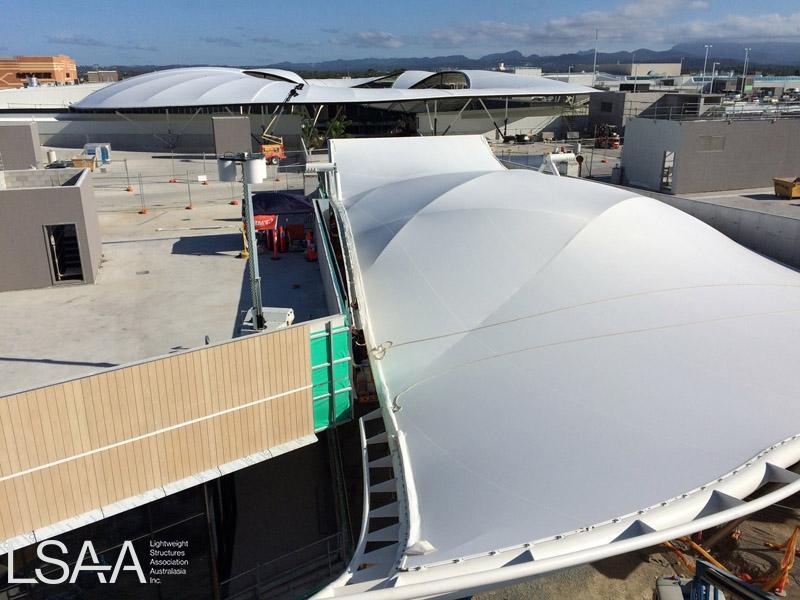 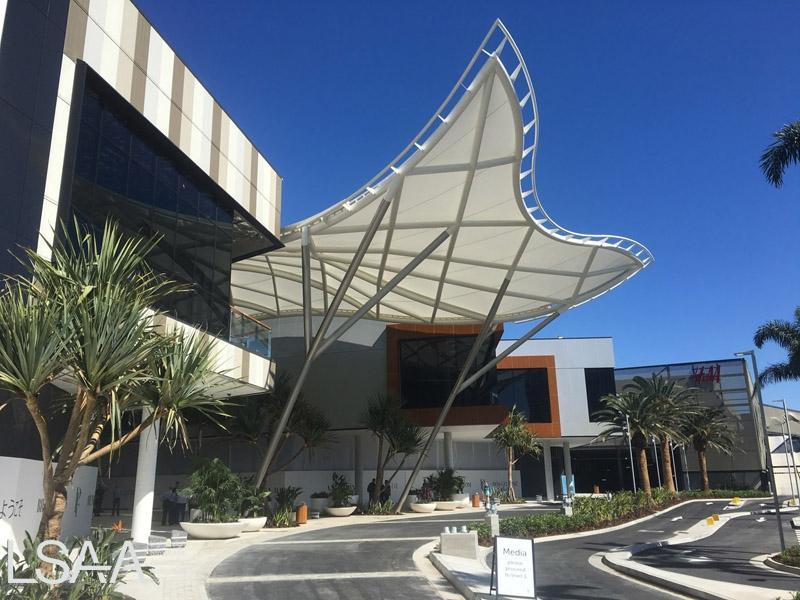 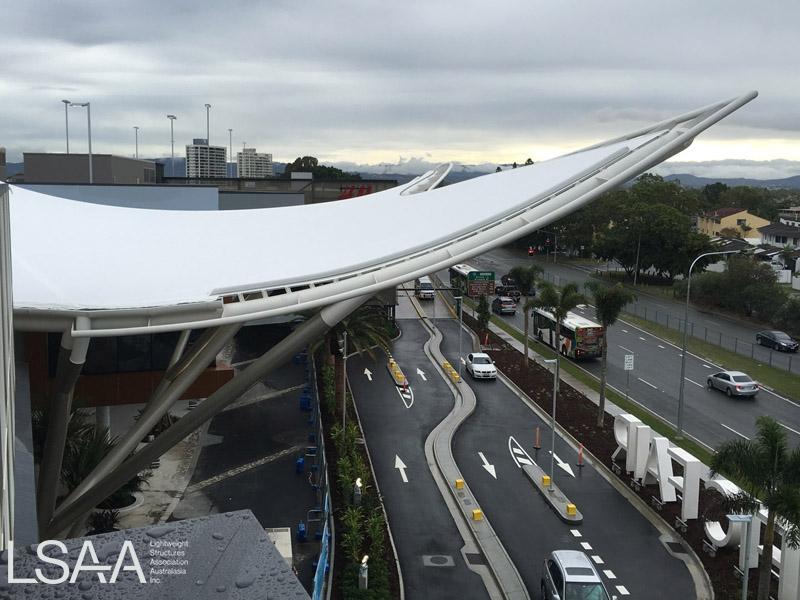 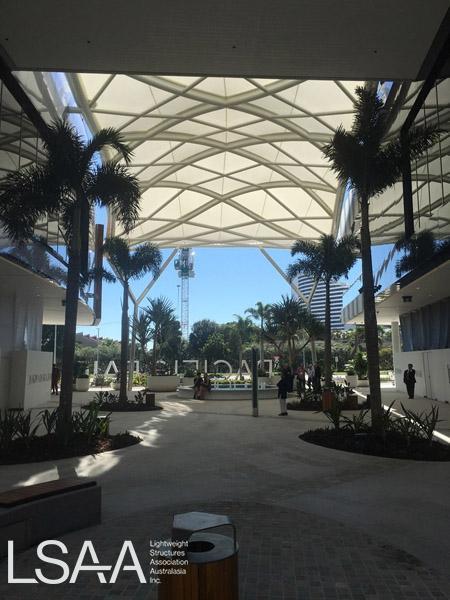 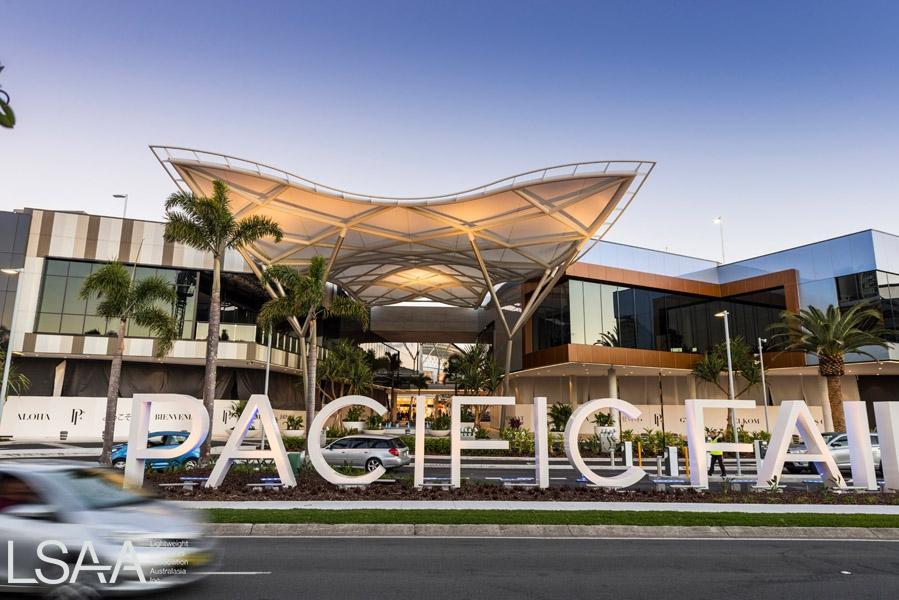 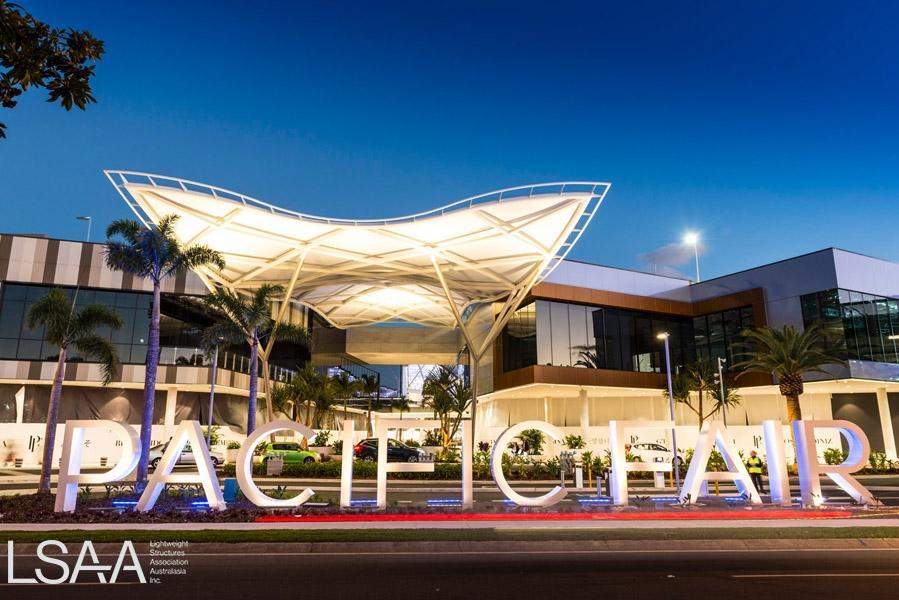 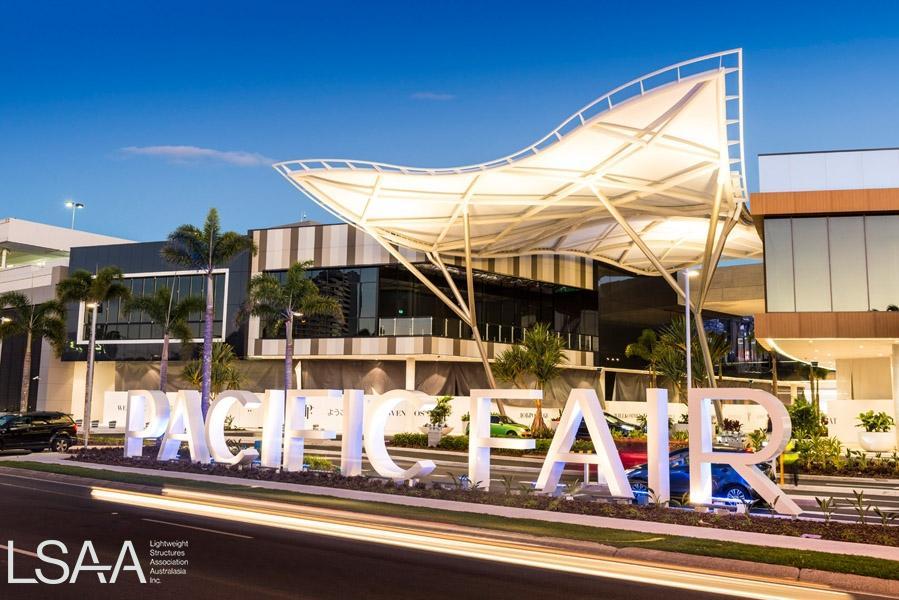 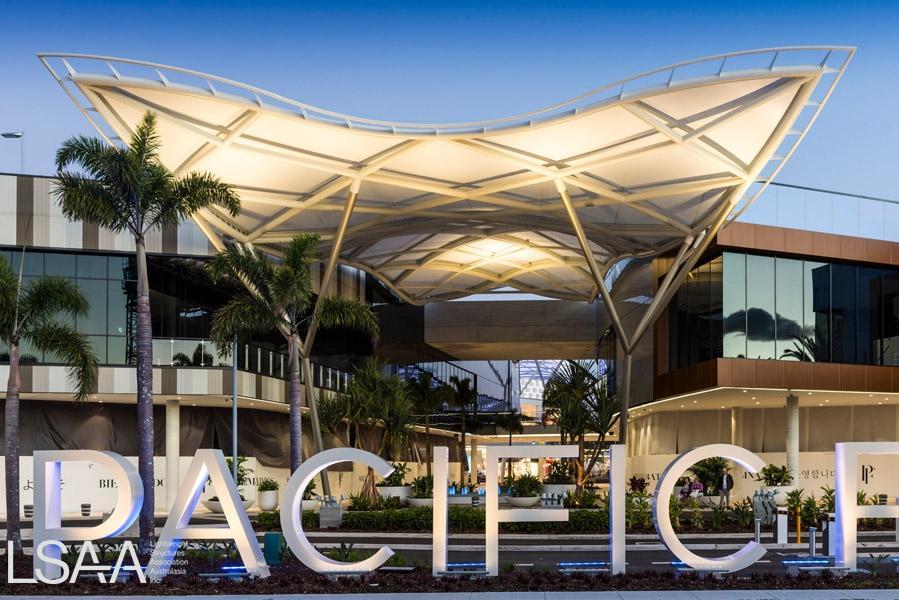 The Pacific Fair porte cochere is the feature structure to crown the main entry point of the newly redeveloped Pacific Fair Shopping Centre on the Gold Coast, Australia. The design mimics the shape of a whale’s tail, which was inspired by the whales often seen in the Pacific Ocean, just 1km away from the Centre.

The structure was designed to create a dramatic architectural feature structure for the main entry that attracts people into the shopping centre. The structure is aesthetically captivating, as well as functional. The Porte Cochere provides shoppers protection from the elements as they drop off and pick up, while still allowing natural light.

The client requested a sculptural fabric structure with ‘wow factor’ to round off the redevelopment of the Centre, incorporating the shape of a whale’s tail in the design to represent the Gold Coast.

The structural system of the porte cochere is a dia-grid shell structure with both convex and concave parts to the shell, taking the form of a ‘whale tail’. This creates very complicated geometry for both 3D modelling and steel fabrication.

For the convex parts of the shell, the PTFE fabric was offset from the primary dia-grid using steel T sections welded to the top of the dia-grid members.

For the concave area, the natural double curvature of the fabric lifts the fabric off the top of the steelwork until it meets the edge beam. Here it is connected via an aluminium extrusion and steel cleats on the steelwork.

The roof structure is supported by two branched tri-columns at the front which spring from ground level and at the rear over head. Steel struts provide support from two points on the third level rooftop car park.

A perimeter gutter collects water run-off, which is then diverted into downpipes. These downpipes are concealed with the tri -columns to ground level

Steelwork: a dia-grid structural system with tri-tree columns on the front, expanding to existing infrastructure.

Fabric: PTFE fabric was chosen for its high translucency, longevity and tensile strength.

Collaboration with the storm water was designed to flow inside the columns and down through footings. The rear of the structure is fixed into building infrastructure therefore loads and connections details where carefully considered.

The porte cochere exceeded the expectations of the client, and is a terrific addition to the $670 million Pacific Fair redevelopment. The end result is a breathtaking entry structure that is an iconic representation of what is possible when building with tensile fabric